Luna -- The Eye of Harry

Remember Luna in her lion hat in the match against Slytherin?  That was quite a good comic gag, wasn't it?  Quirky, weird Luna knew how to make her classmates laugh, whether with her or at her.

But rarely does JK Rowling weave in any comic element without layering a subtle level of meaning beneath it.  And Luna's hats packs quite a roar.

'Hello,' said a vague and dreamy voice from behind them. Harry looked up: Luna Lovegood had drifted over from the Ravenclaw table. Many people were staring at her and a few were openly laughing and pointing; she had managed to procure a hat shaped like a life-size lion's head, which was perched precariously on her head.
'I'm supporting Gryffindor,' said Luna, pointing unnecessarily at her hat. 'Look what it does...'
She reached up and tapped the hat with her wand. It opened its mouth wide and gave an extremely realistic roar that made everyone in the vicinity jump.
'It's good, isn't it?' said Luna happily. 'I wanted to have it chewing up a serpent to represent Slytherin, you know, but there wasn't time.' (p. 357, OotP, Bloomsbury)


Now, compare Luna in her roaring lion's hat with the images of the ancient Egyptian goddess Bast (or Bastet) below:

Bastet was an ancient Egyptian goddess, sometimes associated with the moon, who in her earlier forms was pictured with the head of a lion.  Later, she was frequently pictured with the head of a cat or the shape of a cat.  This transition was probably made as Sekhment, another lion-headed goddess who was more violent in nature, gained in popularity.  Bastet's nature was seen both as a fierce warrior and defender of Pharaoh and the sun god Re (Ra), as well as the gentle nurturer and protector of the home and pregnant women.

Who better to portray a strong woman associated with both love and war in Potterverse than Luna Lovegood (other than Ginny, who also has some similar cat-like qualities)?  Indeed, in the book in which Luna first appears wearing her lion's hat, she becomes one of Harry's most powerful allies within Dumbledore's Army and warrior in the battle of the Department of Ministry.


The wadjet (also called the Eye of Ra, Eye of Horus, and the Eye of the Moon) which Bastet wears on her collar in the stature above, offers protection to the Pharoah as well as all-seeing divine vision beyond normal human ability.  Luna, as one of Harry's bodyguards in the Battle of the Department of Mysteries, not only saw the solution for how to travel to London by thestral, but fought bravely in the battle as well.  But she also offers something no one else in Harry's friends can provide -- insight into the beyond.  Where Professor Trelawney failed, Luna helped Harry uncloud his inner eye and find some solace in the knowledge that Sirius' voice had joined the others, which both Harry and Luna could hear, beyond the veil. 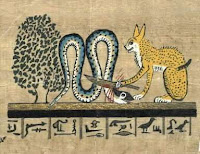 As pictured in the famed Book of the Dead, Bastet is also credited with slicing off the head of Apep, the great snake of chaos who battles Ra on his nightly voyage through the underworld.  While it is Neville who cuts off the head of Nagini in the Battle of Hogwarts, Luna very definitely does her part to rid the world of part of Voldemort's slithering soul.

It is no coincidence that among Harry's friends left behind at Hogwarts that it is Luna who is held prisoner in the Malfoy dungeon.  Not only does her presence there ensure the trap her father set for the Trio at the Lovegood home, but her escape with Harry, Ron and Hermione puts her in a key position to offer Harry the knowledge of Rowena Ravenclaw's diadem, one of the remaining Horcrux's Harry has to destroy in order to defeat Voldemort.  Indeed, the power of Luna's inner eye is so strong, that she provides both guidance and protection to Harry in his battle to defeat the evil of the serpentine Voldemort.

This is the beauty of employing mythic imagery in subtext.  Jo knew what she was doing when she placed that lion's hat on Luna's head and made it roar.  With only a few lines, one image rich with meaning can pack a powerful punch.

Have you employed any mythic imagery in your work?  While techniques like this may not fit every genre or story, it's fun to play with when it does.  I'd love to hear of any examples from your work or others from Harry Potter.