The Original Potter Generation: Where Are They Now? (Survey) 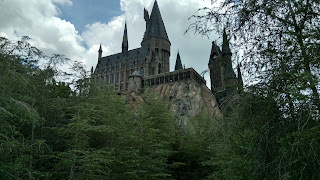 Does the magic of Harry Potter still call to you?

Following up on last week's post on The Next Generation of Harry Potter fans, I've been wondering a lot about the original generation of fans and where are they now. During the last ten days as I've attended multiple Harry Potter and the Cursed Child release events and A Writer's Guide to Harry Potter book signings, I've been blessed to meet and talk with a ton of fans

From young children who are just now discovering the books on their own, to families of readers who have shared their Potter love together, to adults who grew up on the series and still look forward to hearing more about Harry and friends, the love of Potter continues. However, it's the original set of kids growing up during the height of the Harry Potter mania, who are now adults, that I'm most curious about at the moment.

From personal stories readers gave shared with me, I've been blessed to hear of how many were affected deeply by their love of JK Rowling's stories, and not only regarding their reading habits. So many fans developed deep commitment to social concerns and justice after engaging in the trials of Harry and friends as they fought the fear and prejudice of pure bloods against mudbloods or witches and wizards against other magical beings. Others were influenced to become writers or other creative careers because of the stories.

If you are one of these fans, I ask you to take part of my survey for an upcoming article.


Then please consider participating in the survey by answering the following:


Please answer as many as you will, especially the last one, but you do not have to answer them all. And you can be general in regard to personal details if you wish.

You can reply with your answers in the comment trail here, or, if you prefer, send me your owl at SPSipal AT gmail DOT com.

I'll update this blog regarding when and where the article will be posted.

Thank you all for sharing your experience with me (and the world!).

Also, be sure to check out my article on the highly popular AlwaysJKRowling fansite this week, Harry Potter: From Story to Myth. There's a great giveaway included!
Posted by S.P. Sipal at 2:18 PM

The Next Generation of Harry Potter Fans

This past weekend, I was fortunate enough to present and sign A Writer's Guide to Harry Potter at two Harry Potter and the Cursed Child release events, both at local Barnes and Noble stores. Saturday night was in Durham at New Hope Commons, and Sunday afternoon was in Cary (both North Carolina). While Sunday's gathering was more laid back than the very excited crowd for the midnight release party, at both I was fortunate enough to meet and share with some very enthusiastic Harry Potter fans.

There were plenty adult fans gathered, but the group that surprised me the most, the largest group, were the young ones. I'd read an article somewhere in the last few months that the current target-age for the Harry Potter series was not as into it as the past. That some teachers who grew up loving Harry, Ron, and Hermione had a hard time getting their own students to read about their adventures.


But by the amount of in-depth knowledge I was quizzed on throughout both events, I feel Potterdom has definitely charmed a new generation. Some of their parents were fans too, but most were not. The kids discovered the magic on their own or through their peers. And what I found wonderfully surprising is that at least half of the young fans I talked to represented many diverse cultures. Harry Potter remains a story with broad appeal.

I have always been amazed at how well Rowling's youngest fans understand the mysteries and subtext in her series and can pick out the clues. And these kids were no exception. They quizzed me on which ghost belonged to which House (I got stumped w/ Hufflepuff...the shame!), how in Deathly Hallows the Patronus deer in the forest had given away Snape's involvement right away, and insightful speculation regarding how Umbridge had obtained Mad-Eye's mad eye to pin on her Ministry.

As a writer, especially of A Writer's Guide to Harry Potter, it always thrills me to see how many of Rowling's youngest fans are writers themselves. I was blessed to hear many stories already written or in the process of being written. The depth of imagination in these young fans astounds me. I wish I could bottle some of that creativity for days when I feel my own well running dry.

Rowling has left us many gifts through her books, but perhaps the inspiration of a new generation of writers is the greatest. For without Story, Story that has been with humans since the earliest images on cave walls, would we have any of the developments of civilization brought about by imagination?

And now, with the release of Cursed Child and the renewed interest in Harry Potter, Rowling is once again inspiring those with the strongest imagination. Perhaps, this time, the stage will benefit as well.
Posted by S.P. Sipal at 9:40 AM