Lighting the Sacred Way, A Spooky Tale of Ancient Ephesus

I am very excited today because I have a new short story out, and it is unlike any I've done before.  Lighting the Sacred Way is a bit of suspense/bit of horror, set in ancient Ephesus.  Ephesus is one of my favorite places to visit in Turkey and I've long been fascinated with Artemis of Ephesus and the Temple.  For me, it was great fun bringing all that back to life...especially in a spooky sort of way.

What "Lighting the Sacred Way" refers to is the processional route from the Temple of Artemis, around the holy mountain, through Ephesus, and back to the temple where the people would parade carrying a statue of Artemis.  It was a way of bringing Artemis to her people, into her city, since the temple actually lay well outside of Ephesus.

Artemis of Ephesus fascinates me because she is unlike other representations of Artemis throughout the Greek/Roman world.  She seems to be descended more from a local mother goddess than the virgin huntress.  In fact, you can see resemblances to Cybele in the look and worship practices of Artemis.  I won't say too much, because I think I'll do a whole blog post on it sometime soon. 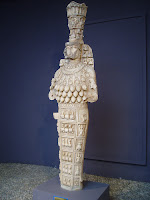 I had fun researching this story, though being as obsessive as I am about details, sometimes went a bit overboard.  Ephesus was quite a large city and a cosmopolitan port of the Roman Empire for several hundred years.  So there was a lot to learn to make sure I had the details accurate for the time period in which my story was set.  I'm sure I've probably mess up somewhere.

Also included in Journeys of Wonder are fabulous stories by Lisa Gail Green, Trysta A. Bissett, Leslie S. Rose, and Ian Kezsbom. I've included some promo material from the publisher below to tell you more about each of these stories of wonder.  But, let me know in comments -- as a writer, what was your favorite setting to research?  Or as a reader to read?

Journeys of Wonder: Volume 2 – the second anthology in a series of genre fiction. Quick on the heels of Volume 1 this new volume brings back some favorite authors and introduces a couple of new ones.


Featured in this volume are five incredible tales – each of which will leave you in wonder and amazement.

On sale only at Amazon.com! $.99 for a limited time or free through the Amazon Prime lending library!

Visit us at: www.journeysofwonder.com
Posted by S.P. Sipal at 1:17 PM

Writing Food into Your Story

Some of the neat aspects of world building many fans cite as their favorites in JK Rowling's Harry Potter series are the imaginative bits of food details she weaves into the stories.  Who wouldn't want to eat a cockroach cluster or suck on a blood-flavored lollipop?  In a very early interview, JKR is quoted as saying:

"...the one book that very much influenced Harry Potter was Little White Horse by Elizabeth Goudge . . . I liked all the food descriptions and I try to put lots of descriptions about meals into all the Harry books."

For her food references, JKR drew upon a variety of sources.  Much of the food eaten at Hogwarts are standard British or Scottish fare - such as Yorkshire Pudding (GoF) and shepherd's pie (CoS).  However, when Durmstrang and Beuxbaton's come to visit in GoF, we are treated to bouillabaisse and blancmange.  Hagrid is known for his treacle fudge that glues your teeth together, while Molly Weasley prepares good home cooking, such as boiled potatoes and mince pies.  And who could forget the midnight deathday feast for Sir Nearly Headless Nick in CoS with its maggoty haggis and slabs of cheese covered in mold?

Wherever possible, JK Rowling used food to help build her world, describe her characters, and add a further magical element into her stories.  Sometimes the food even hid a critical clue, such as the Chocolate Frog card that contained the name of Dumbledore's partner - Nicolas Flamel.


What do your characters eat?  Have you thought about the differences in what your heroine snacks on as opposed to your villain?  Have you considered using the contrast provided by a health-food nut and a junk-food junkie to your advantage?  If you're writing a historical, have you researched what food was available in that day and how it was prepared?  If writing a fantasy, have you extended your world building into the kitchen?  And what kind of creative masterpieces have you come up with?

We all eat.  That is one commonality all readers share, no matter their taste in genre.  And so why not appeal to your readers through your character's stomach as well?  Just be sure not to slow the pacing of your book for a character to sit and chow down.  Food should always be included, when it is used, as part of the action, not a distraction from it.

The food we eat daily is such a basic part of who we are as people, that, as an author, in order for me to know my characters and convey them on the page, I have to know what they would eat as well, even if I don't include all the details.  This is more difficult when dealing with a historical setting...but fortunately, there are a lot of good resources online to help out and even a few authentic ancient cookbooks published.  But for me, any excuse to buy a new cookbook is a good one! :-)

For those of you who, like me, love learning about ancient foods and may even want to prepare a recipe yourself, here's one from ancient Rome that is included in Mark Grant's Roman Cookery that is simple and sweet and easy to prepare:

Itrion: a thin biscuit made with sesame seeds and honey.  Anacreon records it: "I had lunch, breaking off a small piece of itrion and drinking a flask of wine." (Athenaeus: The Partying Professors)

Pour the honey into a pan, bring to the boil and simmer for 10 minutes.  Add the sesame seeds and simmer for another 5 minutes, stirring frequently.  Spread the mixture as thinly as possible on a plate that has been previously greased with olive oil.  Flatten out with a spatula -- wetting the spatula from time to time will help the process.  Allow to stand for a couple of hours, then cut into wedges and serve as a sweetmeat.