A Quest for That Final, Missing Element

Okay all you people who did not vote for Egyptian Mythology when I polled earlier on what you'd most like to see next on the blog. I'm going to subject you to one post of it anyway! Because, you know what? I love it!!! And it's my blog!!!!! Mwahahaha ha!! 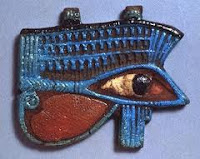 You know another thing I love, and you can ask my kids to verify this, saying "I told you so!"

In putting together this Conflicts of Myth workshop that I'm currently teaching, I revisited one of my ancient writings on Harry Potter from...can you believe this...4 years ago! Before Deathly Hallows came out! Yes, I'm that obsessed, I was even writing then.

I carefully, lovingly pieced together a magnificent theory on what was to come in Deathly Hallows involving the revealing of One Last Memory -- the crucial knowledge of what actually happened at Godric's Hollow from one who was there...Severus Snape!

My theory was brilliant.  It was detailed!  It filled in every loophole!!!  Alas, it was also totally wrong. :-(  Sob!

(Actually, my current theory is that JK Rowling read my brilliant editorial, knew that I was on to her, and quickly had to replot and rewrite the whole last section of Deathly Hallows because she just couldn't accept having been found-out beforehand.  Plus, we DID get one last memory involving old Severus, just not in the way I foretold.)

Ah, hum.  So, anyway, where was I?  Oh, yes, the Egyptian Mythology thingie.  In reviewing this ancient bit of bullet-riddled theory, I came across one section that actually appeals to me even more now that we know the full revelation of Voldemort's Horcruxes.  And it involves one of my other favorite theories, the Eye of Horus.  Since I've already covered that one in depth on the blog, I'll simply refer you to that post for background.

But, knowing that most of you will not click that link and read, very simply, Mad-Eye Moody's magical eye seems to be a link to the Eye of Horus.  The Eye was an amulet that provided protection for its bearer, until it cracked; it would turn back any evil directed its way -- much as Lily's charm did for Harry.  Lily's charm, an amulet, get it?  Metaphorically speaking, Lily pinned an Eye of Horus on her beloved son, just as mothers in Turkey still do today.  (Though they tend to pin it to their clothes rather than their skin.)

JK Rowling has worked several of these Egyptian myths into the Harry Potter series, and one day I'll tell you the underlying reason why I think she did so, but for today...I just want to focus on the Eye (get it, focus, eye). (Yes, I know it seems like I've been drinking and I'll probably erase half of this in the morning, but for now it's fun.  And no, I haven't.)

Anyway...here's one of the interesting meanings of the Eye of Horus.  You'll not see this coming, I can guarantee it.

It was an ancient mathematical calculator!!

See. Told ya you wouldn't foresee that!

Now, the funny thing about this ancient fractional calculator is that it doesn't quite work.  At least it doesn't work by modern standards.  See, if you add all those fractions together you don't get the whole number one...exactly.  And, no, it's not because the ancients couldn't do math.  It's because they thought a bit differently than we do.  It's because they valued something beyond pinpoint mathematical accuracy.

The element of the spirit.

The six parts which made up the Eye of Horus were used as mathematical symbols to represent decreasing fractions progressively halved (1/2, 1/4, 1/8, 1/16, 1/32, 1/64). Each of these Eye symbols and fractions also represented a sense (smell, sight, thought, hearing, taste, and touch respectively). The six parts together embodied a whole, a complete--except that they total 63/64, missing one small fraction, 1/64...the 7th missing  magical element.

There was an esoteric meaning associated with this missing fraction. “The eye is the part of the body able to perceive light, and is therefore the symbol for spiritual ability.”[45] The missing fraction of the eye represented a magical element supplied by Thoth, which cannot be quantified, but without which nothing, and no one, is complete.[46].

Because this missing magical element is so important, JKR left us two direct clues regarding it within the Half-Blood Prince text--Golpalott’s Third Law and Quintessence: A Quest.  But more on that in a minute.  First, let's look at these six fractions and how they relate to the Horcruxes.

Let’s see--Tom Riddle's teen voice was recorded in a diary for a young girl to hear and follow years later, a ring is worn on fingers which touches things, a locket holds something you can look at, you can drink (taste) out of a cup, and Nagini, well, snakes are known for their keen and unusual sense of smell. In fact, in the CoS book as opposed to the movie, after Fawkes blinded it, the basilisk had to sniff Harry out. Coincidence? I think not!

Here's the parts of the Eye of Horus and how I think they played out in JKR's Horcruxes:

I'll be honest with you, while this is fun to speculate, even I'm not sure that JKR intended these connections.  One of the key doubts I have always had regarding this theory is due to the order of the fractions related to the Horcruxes.  If I were the author writing it, I would have the Horcruxes created in the fractions' descending order starting from 1/2, to 1/4 until 1/64.  That makes perfect sense in keeping with the decreasing divisions of Voldemort's soul as he rips it apart with each new murder.

However, JKR always plays rather loosely with her mythical links, and there is one final piece of evidence that strengthens my belief that she was at least giving a nod to the Eye, if not quite as literally as I would like to interpret.  Golpalott's Law and Quintessence, a Quest both point to the Eye's same final, missing element.

In HBP, Golpalott’s Third Law is a potions’ law that Harry, and many readers, find quite difficult to understand.

“...which means, of course, that assuming we have achieved correct identification of the potion’s ingredients by Scarpin’s Revelaspell, our primary aim is not the relatively simple one of selecting antidotes to those ingredients in and of themselves, but to find that added component which will, by an almost alchemical process, transform these disparate elements--”[47]

What all this means is that there’s an intuitive, almost alchemical knowledge which comes to bear in creating an antidote to a blended potion. Secret knowledge of an important missing element, so to speak.

In Chapter 15 of HBP, “The Unbreakable Vow,” Harry, while trying to avoid being dragged into Ron’s grumblings against Hermione, is reading a book for Charms, Quintessence: A Quest. I believe this is a very sly reference from JKR, to reinforce the Eye of Horus analogy and the stated Golpalott’s Law. Just to make sure we get the point.

Quintessence is an alchemical term for the mystical fifth element. Earth, air, water, and fire are the traditional four elements which make up everything that exists. In Harry Potter, JKR has confirmed that each Hogwarts House represents one of these elements: Earth = Hufflepuff, Air = Ravenclaw, Water = Slytherin, and Fire = Gryffindor.[48] And each of these elements is represented in the Horcruxes, with Gryffindor's sword being the most common item of destruction.  But there is a fifth element, quintessence, which I think plays an even stronger role in the series, indeed is the embodiment of Harry’s personal quest.

From The Alchemy Lab:


The Quintessence is the fifth element with which the alchemists could work. It was the essential presence of something or someone, the living thing itself that animated or gave something its deepest characteristics. The Quintessence partakes of both the Above and the Below, the mental as well as the material. It can be thought of as the ethereal embodiment of the life force that we encounter in dreams and altered states of consciousness. It is the purest individual essence of something that we must unveil and understand in order to transform it.

Essentially, quintessence is spirit, it is soul. Quintessence, for JK Rowling, is embodied in Harry.

Voldemort didn't intend to make Harry a Horcrux.  Harry's the missing element.  He's the fraction of the equation which Voldemort could not comprehend, and thus did not take into account.  He's that most important final element that brought about the failure of Voldemort's dark magic to secure eternal life.

As writers, this is the part of my post where I turn to how we can use these lessons learned from studying JK Rowling in our own stories...blah blah blah.  Honestly, I doubt there's many of us that obsessive who will plot a subtextual reference to this extreme.  And if you are one of those, you don't need me to point out how to do this yourself!

But, I'd love to know what you think.  Am I off on a wild crumple-horned snorkack chase here? Or do you think, just maybe, JKR may have been pulling the Quintessence over our Eyes?


P.S. - Need a professional edit on your manuscript before you submit or publish direct? Be sure to check out my services!
Posted by S.P. Sipal at 10:35 AM