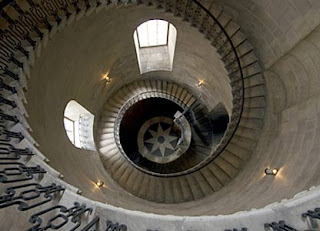 “Well then, I think the answer is that a circle has no beginning.”

One of JK Rowling's thematic images that I believe to have been most powerfully conveyed in the movie Prisoner of Azkaban was that of the spiral. Remember Trelawney's crystal globe thumping down the spiral staircase of the Astronomy Tower? Or what about the spiral of the fossilized snail on the rock that Hermione threw at Harry's head in the time-turner sequence?

Alfonso Cuaron's film was one of the most artistic of the series, and he knew how to hit home (and heads!) with certain themes. The spiral is a beautiful metaphor for how Jo dealt with themes throughout the Potter series

How JKR begins her story is how she ends it, but not in a simple circle where nothing is gained or loss, but as a spiral, ever progressing.

I'd like to look at five of the main themes that JKR developed throughout the series which carried through to the climax of the final chapter. We'll examine how she introduced each theme, how they spiraled through the story, and what she finally had to say about each one at the conclusion.

"It was here," [Ron] touched a point close to his heart, "I could feel it, it was hot. And once it was inside me I knew what I was supposed to do, I knew it would take me where I needed to go."
----  Ron Weasley, Deathly Hallows

It could be argued that the action which sets this whole Potter saga in motion is when Peter Pettigrew betrays his best friend James. His act of disloyalty in order to save his own rat hide leads the whole wizarding world into a downward spiral of darkness and war, with deaths suffered by the many touched from the Death Eater's and Voldemort's wands.


One of the aspects of the series fans will often mention as their favorite is the loyalty shared between the trio of friends Harry, Ron, and Hermione. And yet, each has a fall-out with the others through the course of the seven books. Ron's jealousy with Harry causes them not to talk for weeks during Goblet of Fire. Harry won't forgive Hermione for reporting his Firebolt to McGonagall in Prisoner of Azkaban. And of course, Ron's fight with Hermione over Crookshanks killing Scabbers not only pointed to a major theme, but a crucial plot device as well.

But perhaps the greatest show of tested loyalty came in Deathly Hallows when, suffering form the effects of wearing Voldy's Horcrux, Ron left his best friends. It was his love and loyalty for them, as well as Dumbledore prescience in gifting Ron the Deluminator, which enabled his return. For what is a Deluminator exactly? For JK Rowling, a Deluminator takes light from one source and sheds it upon what is most important to that person. For Ron, his love of Hermione, and his loyalty to his friends, is the guiding light that brings him back into the heart of the trio.

While Bellatrix shows extreme loyalty to Voldemort, hers is an example of a perverted twist of loyalty that is not returned and only results in the harm of others. Voldemort is loyal to none as he AK's or tortures anyone who trips him up, no matter how loyal they have been in the past.

Finally, it is the loyalty of the three friends, the loyalty of the students toward Hogwarts, including Slytherin, and the loyalty of Snape to his childhood love, that conquers the lonely Voldemort and his band of demented souls whose only true loyalty is to themselves and their own desire for eternal power.

Even though as hero, Harry must in each ending take the final step, he never would have made it to the point of facing his worst fears without his friends by his side. As Sirius says, keep your friends close. Because what is life without friends?


"To the well-organized mind, death is but the next great adventure."
------  Dumbledore in Philosopher's/Sorcerer's Stone

According to Dumbeldore, as the mouthpiece for JK Rowling, sometimes the things we most want as humans are the last things that will truly make us happy. Voldemort pursues eternal life with a rapier-sharp passion unrivaled by other wizards. And yet, is Voldemort ever truly happy?

Death looms over the series from the beginning through to the end. From the deaths of Harry's parents, which brings him into the home, if not the bosom, of the Dursley family, to the deaths of Cedric, Sirius, Albus, Remus and Tonks, Fred, Collin, and many others, the fear and often untimely ending of everything human is explored from various perspectives.

The taking of life is the most evil spell a wizard can cast, which leaves a permanent blight upon his own soul. Whereas the acceptance of one's own death is perhaps presented as the noblest, even if the most shocking -- Dumbledore's fore-planned sacrifice. (For the rest of us Muggles, it's called a Living Will).


A Rainbow of Gray:

"The world isn't divided into Good People and Death Eaters."
------ Sirius Black in Order of the Phoenix

People are not divided into black and white, but most of us exist in some shade of beautiful gray.

While the series started off somewhat simplistically, with Harry's world fairly well defined between the good and the bad, it did not remain that way. Over the years, Harry not only had to face the mistakes and disappointments made by the adults and friends around him, but had to also come to grips with the dark side of his own character.

For me, the most exemplary moment in which Harry explored the darkness of his own soul was when he cast the sectumsempra spell at Malfoy. In every place before, even when confronting Death Eaters and Voldemort, Harry aimed to disarm, petrify, or impede, not to physically harm. From this point with Draco, Harry understood the fire he'd been playing with in the Half-Blood Prince's potion book and gets rid of it. How fitting it is, then that in the end of DH, Harry saves Malfoy's life (twice)!

This theme of the various shades of gray of human character is best exemplified by Snape, who is one of the grayest. (For more, please see my post on Snape's Gray Undies). Indeed, it is because of Snape's very gray, ambiguous character that he is also considered the most intriguing in the whole Potter universe.

Even Voldemort, the chief baddie and darkest character in the book, is shown with a touch of gray when through the Pensieve we see what brought him as a child to such darkness.

In the end, Harry does not defeat Voldemort as the white knight on a stallion charging at a black dragon, but rather as as a young man who has faced his dark side, challenged his shadow, been refined and strengthened through conflict, and learned to trust the loving side of his nature rather than his hatred and fear of death. Because, for JK Rowling, the key ingredient in determining what shade of gray we reflect relies on what choices we make.

"It is our choices that show what we truly are, far more than our abilities."
------  Dumbledore, Philosopher's/Sorcerer's Stone

From Harry's first moment of choosing Gryffindor over Slytherin, and Dumbledore's explanation, we know that this is one of the main themes of the series. Harry chooses to risk winning the TriWizard tournament in order to ensure that Fleur's sister is safe. He chooses to claim the Goblet of Fire with Cedric. He then chooses to risk his life to bring Cedric's body back to his parents. Ron and Hermione choose to accompany Harry on his dangerous quest to find and eliminate Voldemort's Horcurx. Ron chooses to return. The examples are too numerous to name. We see choices that bind friends together as when Hermione covers for Ron and Harry about the troll, and choices that tear families apart, as when Percy turns his back on his family. Finally there are the choices that kill, such as making Horcruxes, and choices that save, such as finding Hallows.

In the end, Harry makes the choice to disarm Voldemort rather than to kill. It is Voldemort's choice to kill anyone standing between him and eternal life which denies him that impossible dream.

Dumbledore: "She sacrificed herself for you. And that kind of act leaves a mark... This kind of mark cannot be seen. It lives in your very skin."
Harry: "What is it?"
Dumbledore: "Love, Harry. Love."
------ Philosopher's/Sorcerer's Stone

Finally, the inner core that guides the choices a person makes is the love that person feels. Love is the most powerful, ancient magical theme in JKR's awe-inspiring arsenal. It is love that makes Lily give her life freely in order to save her baby's. It is love that lives in Harry's skin protecting him from Quirrel's touch and Voldemort's reach in his mother's blood house. It is the love that Harry feels for Sirius that Voldemort cannot stand to come in contact with. And it is love of his friends and adopted family and sharing in those they have lost that guides Harry's feet into the Dark Forest to lay down his own life so that others may live.

To be denied love is to not only never truly live, but to also exist in the meanest way possible. To be denied the love you seek, even when it may be your own fault, is to live a bitter life, never filled with the joy of sharing your innermost dreams with another.

Love is the magic that lives beyond the grave. Love is the balm that carries us through a Dementor's attack. And love is the music of the Phoenix song that lift our hearts and inspires us in our darkest times.

What themes do you work with in your own novel? How have you introduced it to your reader? Have you shown the theme in its full glory, from its negative through to its positive aspects? Have you brought your theme home, in a magnificent spiral from the beginning, to conclude it at its strongest, most powerful impact?  And can you somewhere, somehow in your story encapsulate your theme in the words of one of your characters?

Themes help guide our writing, keeping us on track as authors. For myself, I may be able to start a story without a theme in mind, but I won't be able to conquer the hard parts until my core is identified. I think of theme as the hub of my story's wheel, around which rotate the spokes of character, plot, setting, conflict, and metaphor. Any time I get stumped, and am unsure of which choice to take, I go back to my theme and let it guide me.

How you choose your theme is as varied as there are writers out there. But one thing is for certain. Choose your theme wisely, for if it does not resonate with you personally, it does not stand a chance in an Inferi cave of igniting a flame within your reader's heart.