It was one of JK Rowling's most memorable scenes from Order of the Phoenix, one that fans could not wait to see come to life on the big screen, and not just because they were eager to view the four marauders together, alive as teenagers.  No, everyone wanted to see Snape and James go at each other.  And many were dying to laugh at Snape's graying underpants. 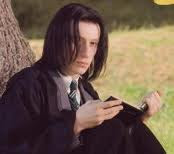 Behind [James], the Impediment Jinx was wearing off.  Snape was beginning to inch toward his fallen wand, spitting out soapsuds as he crawled.
"I wouldn't go out with you if it was a choice between you and the giant squid," said Lilly.
"Bad luck, Prongs," said Sirius briskly, turning back to Snape.  "OY!"
But too late; Snape had directed his wand straight at James; there was a flash of light and a gash appeared on the side of James's face, spattering his robes with blood.  James whirled about; a second flash of light later, Snape was hanging upside down in the air, his robes falling over his head to reveal skinny, pallid legs and a pair of graying underpants. (p. 647, OotP)


I do not think those gray undies are thrown in casually for a bit of nasty flavor.  Indeed, I think JKR possibly crafted this whole scene around them.

This view through the Pensieve opens Harry’s eyes to the fact that he’d placed his father on a pedestal that was both unhealthy and unrealistic. The world is not filled with good people and Death Eaters, but ultimately most of us are various shades of gray. And that’s where Snape’s exposed undies come in. Snape, like his undies, is one of the grayest.

Snape was deliberately constructed by his creator to be a man of uncertain allegiance, trusted by few, doubted by many, living in a world of shadows, existing on both sides of the Dumbledore/Voldemort divide. A man who intentionally concealed secrets and motivations.  A character of ambiguity.

His never-ending morphing keeps the reader off-guard, on the alert, and constantly wondering. Readers latch onto Snape because the uncertainty of his ambiguity commands it. His mysterious nature demands the reader’s questions and inward exploration. What do I think about loyalty, appearances, the power of trust? Do I believe a person can be nasty and mean and still serve a higher good? Do I agree that a Slytherin and a Gryffindor have anything in common and can work together to defeat true evil? And who am I inside? Where do my loyalties lie? Would I defend Snape, or bully him upside down?

Who you are inside will determine how you interpret Snape. Snape will be understood, in your mind, in direct accordance with your worldview. That's why readers were so polarized. Snape draws the reader’s involvement because that is his very purpose.

As writers, we can challenge ourselves to make sure the real world in all its texture and complexity is reflected within our story.  Once you have constructed your hero and antagonist and defined the themes that differentiate them, have you created a character to embody the vast space of grayness that lies between them?  Have you got a Snape, complete with gray undies, ambiguous in nature, who could be viewed as friend and foe by both sides?  A character, who like most of us, is not totally good or evil, but somewhere in between, who challenges the subtle nuances of your theme.  And can you craft this character with a hint of mystery, to keep both your hero, and your reader guessing, as they did with Snape, until the very end?

One last thing to note regarding JKR's craft in the scene snippet above.  See that other highlighted section, the curse Snape threw at James that caused a gash on his head and made him bleed?  What does that remind you of?  A bit of foreshadowing of Half-Blood Prince to come?  We see here Snape using the curse that caused Harry so much trouble with Draco, and the Prince himself, in the next book.

A clue, foreshadowing, character development and theme definition, all in one tidy little memory.  That's JKR for you!

Have you written an ambiguous character into your story?  I'd love to hear about it.

(This insight to Snape's character was inspired by a talk I heard given by LogosPilgrim at The Witching Hour in Salem, MA in 2005)