For an example of the zoom detail (see prior article) which JKR weaves in so delightfully, I thought it would be good to look at a bit of world building which progresses throughout one story.

Remember the mandrakes from Chamber of Secrets?  Those wonderful potted plants which Professor Sprout was nurturing to stew up and give to Harry's classmates who had been petrified?  JKR depicted the mandrakes with such humorous, human detail, which was only depicted in one scene in the movie.  But in the books, bit by bit, she showed the mandrakes growing up. I thought it would be interesting to capture this clever progression in one place. 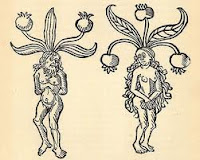 During the first day of classes:


Harry snapped the earmuffs over his ears. They shut out sound completely. Professor Sprout put the pink, fluffy pair over her own ears, rolled up the sleeves of her robes, grasped one of the tufty plants firmly, and pulled hard.

Harry let out a gasp of surprise that no one could hear. Instead of roots, a small, muddy, and extremely ugly baby popped out of the earth. The leaves were growing right out of his head. He had pale green, mottled skin, and was clearly bawling at the top of his lungs.
(p.117 - 118)

Professor Sprout had made it look extremely easy, but it wasn't. The Mandrakes didn't like coming out of the earth, but didn't seem to want to go back into it either. They squirmed, kicked, flailed their sharp little fists, and gnashed their teeth; Harry spent ten whole minutes trying to squash a particularly fat one into a pot.
(p.119)


By next morning, however, the snow that had begun in the night had turned into a blizzard so thick that the last Herbology lesson of the term was canceled: Professor Sprout wanted to fit socks and scarves on the Mandrakes, a tricky operation she would entrust to no one else, now that it was so important for the Mandrakes to grow quickly and revive Mrs. Norris and Colin Creevey.
(p.250 - 251)


There had been no more attacks since those on Justin and Nearly Headless Nick, and Madam Pomfrey was pleased to report that the Mandrakes were becoming moody and secretive, meaning that they were fast leaving childhood.


"The moment their acne clears up, they'll be ready for repotting again," Harry heard her telling Filch kindly one afternoon. "And after that, it won't be long until we're cutting them up and stewing them. You'll have Mrs. Norris back in no time."
(p. 298 - 299)

Note: this is really quite gruesome when you think about it. Professor Sprout is nurturing these baby mandrakes in order to cut and stew them up.


It was now nearly four months since Justin and Nearly Headless Nick had been Petrified, and nearly everybody seemed to think that the attacker, whoever it was, had retired for good. Peeves had finally got bored of his "Oh, Potter, you rotter" song, Ernie Macmillan asked Harry quite politely to pass a bucket of leaping toadstools in Herbology one day, and in March several of the Mandrakes threw a loud and raucous party in greenhouse three. This made Professor Sprout very happy.

"The moment they start trying to move into each other's pots, we'll know they're fully mature," she told Harry. "Then we'll be able to revive those poor people in the hospital wing."
(p. 318)

Notice the detail with which the mandrakes progress from baby to adult:

Baby -- mottled skin, bawling at the top of their lungs, squirming, kicking, flailing their sharp little fists, and gnashing their teeth

Young Child -- needing to be fit with socks and scarves against the cold, as a mother would bundle-up her child

Adolescents -- moody and secretive, with acne

Adults -- moving into each other's "pots"


This is a simple, quick example that I find funny and delightful.  It shows the extent to which JKR builds her world by zooming in on detail that adds a rich layer of interest and amusement for the reader.  Not only does she concoct a potion with a plant that in historical folklore was thought to embody human properties, but she imagines those human features in full, captivating detail, from the flailing fists of an infant to the loud, partying teen.

Think about it.  JKR could have just presented a funny looking plant, mentioned once and then forgotten -- as many writers would have.  But by describing the plant as it matures, she not only gets to introduce some amusing (and gruesome) imagery, but also provides an important plot point.  After all, it is because Professor Sprout has to wait for the baby mandrakes to mature that those petrified must remain stone-silent, guarding their secret knowledge of the Chamber of Secrets' monster, until the climax at the end of the school year.

It's this kind of exquisite craft that so engaged her readers.  Taking it to that extra level is what makes JKR so successful.  And yet, she built these descriptions with just a few sentences here and there, woven into conversation that helped forward the plot as well.

As writers we need to challenge our world building to imagine our creation in such minute and sensory detail that we can bring it fully alive to our reader -- with as few words as necessary.  Challenge your world.  Where can you take it further?  Where can you add, with minimum words and phrases, the little extra nuance to breathe your world to full life and delight your reader?

What zinging detail have you added to a recent story to make it pop?
Posted by S.P. Sipal at 11:06 PM