In celebration of Deathly Hallows' release, I'm going to do something I don't usually do on this blog. I'm going to indulge myself in a post that is truly more fan speculation rather than writer analysis. What can I say? I came to Harry Potter first and foremost as a fan!

Back in the summer of 2007, after the cover for Deathly Hallows had been revealed, but before the book had been released, I, like many other HP fanatics, was caught up in exploring and speculating on every aspect of the cover for possible clues toward the forthcoming story. I was especially fascinated with that mysterious, geometric symbol on the spine of the Bloomsbury UK cover.

Having already spent a good deal of time analyzing and presenting workshops on the alchemical and Egyptian mythological underpinning of the series, I looked there for an understanding of the symbol. I completed an editorial analyzing it as the last segment of a 3-part essay on Egyptian Mythology in Harry Potter that was published on Mugglenet.com.

Unfortunately, the editors at Mugglenet were so busy posting an onslaught of last minute theories before the final revelation, that they didn't get the last two parts of my series posted until the comment section had been shut down ahead of DH's release to prevent spoilers. So, I never got feedback on my, of course, brilliant theories! ;-)

But now that I have a blog of my own, I can subject you all to this last, lost speculation! So, if you're ready to revisit those long-gone wonderful times of plastering the Internet with wild theories before the next Harry Potter release, then sit back and grab something good to drink, because when I dip into fan speculation, I tend to get long-winded.

Harry's Sacred Egyptian Triangle
In the introduction to the essay linked above, I said:

And now for what I consider the most exciting part of this three-part editorial -- that symbol on the spine of the Bloomsbury children's cover, the one that has inspired much discussion, sparked such controversy, and appeared as the key into the last round of W.O.M.B.A.T. questions. That sign, in my opinion, is a decidedly Egyptian symbol with some mixed-in alchemical and Masonic esoteric meaning. Essentially, I think it is a composite sign of JKR’s own creation -- an Egyptian Triangle with the Eye of Horus and Tree of Life layered on top.

(My editorial is very long, but if you're interested, it will give you greater insight to the theories below).


My argument was thus: 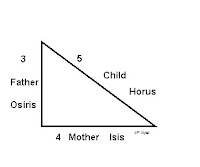 1) The triangle represents the sacred Egyptian Triangle or Golden Triangle, personified by the goddess Isis, her deceased husband Osiris, and their child Horus. These three together formed the Egyptian holy family and thus symbolized eternal love and the new life that is born of that love. (Through earlier parts of my editorial, I'd already analyzed how Isis = Lily, Osiris = James, and Horus = Harry). Two of these triangles together formed the shape of the Great Pyramid of Kafre at Giza. 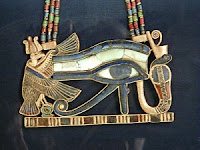 2) The circle inside the triangle represents the Eye of Horus, a symbol of Divine healing, protection, and restoration.  An apotropaic amulet (turns back harm) it is the ancestor of the Eye of Providence watching out from afar, giving guidance, and continues even today in the form of the Turkish evil-eye bead, nazar boncugu.  The Eye is framed by the falcon, who represents Horus, originally a sky god (and man, can Harry fly!).  Because of its strong association with healing and restoration, many amulets would often be placed within a mummy's wrappings.

3) The line bisecting both triangle and circle from bottom to top represents the Tree of Life, a symbol of life, obviously, but also of a central pillar that had roots in the underworld, a trunk in our world, and branches into the realms of the gods.  In ancient Egypt, it is represented by the djed, a symbol of Osiris, who was tricked by his brother Set to lie in a coffin that was then sealed shut, killing him. The coffin eventually becomes enclosed in a huge tree which is used as a pillar at a palace in Byblos.  With its four branches, this Tree of Life supports all four corners of the cosmos.  With its associated myth of a body hidden in a coffin hidden in a pillar, it also represented sacred esoteric knowledge.  Sometimes considered to be the spine of Osiris, the djed also represented strength and stability.

Now, as it's been over three years since Deathly Hallows has been released, read, reread, and digested, I can look back on this speculation and see how my original theory fit in with the reality of the book (or at least my opinion of it!).

How JKR used this Egyptian symbolism in her created Hallows:

1) The invisibility cloak was the one Hallow handed down from father to son through the generations.  It represented love and protection, and for Harry was almost always shared among his only living family -- his friends Ron and Hermione.  Notice that it was quite frequently the three of them under that cloak, Harry's own golden triangle of friendship and love.  It was also the only Hallow Harry kept, because, like the Egyptian Holy Trinity, its protection and love of family was eternal.

2) The Resurrection Stone had the ability to bring the dead back, just not to real life.  For Cadmus, it drove him crazy to be with a love he could never truly possess again.  But for Harry, who sought not to possess but to be counseled, the stone brought him comfort from the guidance of those who had gone before.  Like the Eye of Horus, Lily, James, Lupin, and Sirius truly gave him divine loving guidance and protection on his walk to meet Death and restore the natural order.  And of course, we must not forget Dumbledore, who through the blue eyes of his brother Aberforth in the fragment of a glass mirror (like the Turkish blue-eyed bead), still watched out for Harry throughout this last book.

3) If you look at that line on the Bloomsbury cover representing the wand, you'll see that it's actually a spear, with a pointed tip at its head.  As the most powerful wand created, the Elder Wand had the ability to pierce the Veil of Death by both sending its master's adversaries across the veil, and supposedly preventing its master from making the trip himself.  Of course, it failed to do the latter.  However, the elder wand, this stick from a tree, is an ironic symbol of the Tree of Life in its human-mangled transformation into a Death Stick. Because, as always with JKR, it is the choices we make, not some magical tool, that determines our path in life.  As the knowledge of the hidden body of Osiris suggests, it was the esoteric knowledge Voldemort failed to obtain which Harry did, about the power of the wand, the force of love, which ultimately removed his life.

In the end, the invisibility cloak would be passed on to Harry's children, continuing the eternal gift of love and protection from parents to child.  The Resurrection Stone was dropped in the Dark Forest, buried in the dark soil, just before Harry confronts Voldemort to offer himself as a sacrifice and restore both himself and the wizarding world. I find it extremely interesting that the Elder Wand is returned to the coffin of Dumbledore...as if a deliberate wink to the coffin of Osiris entombed in the tree-pillar.  Stability has been restored...for as long as the power of the wand, the desire to take life rather than to give, is no longer misused.

Even back in 2007, I never believed that JKR in her actual text would use any of these words: Egyptian Triangle, Eye of Horus, Tree of Life, but rather that these symbols were subtextual, hidden below the surface, to provide an extra layer of depth and meaning to her rabid readers.  Of course, all this is conjecture on my part, and I may be totally off the mark in the meaning and images she was drawing upon when she created her Hallows.

But there is one thing I am sure of...when dealing with an author of JK Rowling's caliber, she most definitely had carefully, thought-out meaning and well-researched imagery behind each of those symbols.  And when she finally issues the Harry Potter Encyclopedia, I'm hoping we'll find out these final secrets! (7/7 update: Now hoping that Pottermore knows all!)

Have you incorporated symbols into your own work?   What was the source of your inspiration?