An Epic Battle of Worldbuilding Proportions

This is the second in a series of posts to analyze the final chapter, "The Flaw in the Plan," of Deathly Hallows.

We knew it was coming.  The winds of war had been howling stronger with each successive Potter tome's release.  When it finally came, the battle for Hogwarts mobilized all the magical creatures and beings named before in the series -- giants and centaurs, thestrals and Hippogriffs, Gryffindors, Hufflepuffs, Ravenclaws, and even Slytherins led by Slughorn. Most touching of all was perhaps the site of the house-elves, stabbing at the Death Eaters' knees, led by Kreacher, with Regulus' locket bouncing on his chest. 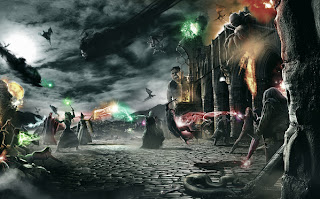 Throughout her first six books, JK Rowling had created an immense empire of magical items, creatures, and people. To truly pull off an epic battle of good against evil, it was imperative that she bring all these worldbuilding elements together in her final battle plan.

Let's see how well she did.

If I can list 34 important included elements to only 3 missing, then I think JKR deserves an A+. Also, remember that it was a dragon which provided Harry's ride to the battle, and the dragon was "given" to him courtesy of the goblins.

Why was it important to have all these world-building elements present in the final battle? While most of them are not true Chekohv's Gun elements, the same principal applies -- when an important element has been introduced in the beginning of a story, the reader expects it to execute before the ending. For a satisfactory read, fans needed to see all these individual roles play out fully toward the final culmination.

But HOW these world-building items are woven in must make sense, must contribute to the whole, and must do so in a natural way. If you'll go back and read each of these elements in their place in the final chapter, you'll notice that rarely does JKR give more than a phrase or a sentence to each. The details are briskly interwoven into the adrenaline-filled pacing that pushes ever forward toward Harry's confrontation with Voldemort. She doesn't pause to cameo each item in loving detail...that would slow the pace.

Even if you're not writing fantasy, you've created a unique world for your characters to inhabit. Have you considered the full-import of each of your world-building elements and how each one will play out in your final confrontation? And who can't wait to see McGonagall's army of suits of armor join the battle? (In my head I'll be singing Subsitutiary Locomotion. :-)


P.S. - Need a professional edit on your manuscript before you submit or publish direct? Be sure to check out my services!

Photo Credit: You must check out this fabulous fanart series depicting the final battle.
Posted by S.P. Sipal at 12:16 PM