Today we welcome to the blog Lisa Gail Green, published author of YA Paranormal/Fantasy stories and blogger at Paranormal Point of View. Lisa was one of the first people to welcome me to the Blogger/Twittersphere when I started Harry Potter for Writers. We share a love of Harry and of writing and I have found out since that Lisa has a delightfully twisted mind. :-) 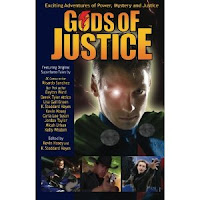 She's also incredibly talented, as I discovered recently when I read her newly released short story "Identity Crisis" in the superhero inspired anthology Gods of Justice. Lisa's heroine, Leslie, is an identical twin living in the shadow of her superhero sister, until she's called upon to use her own awesome powers that she didn't even know she possessed. Check it out at Amazon.

So, thanks Lisa, for visiting with us today and setting us straight about the superhuman capabilities of that enchanting storyteller, JK Rowling:

To most writers, JKR is an icon. Someone untouchable, someone we can aspire to be, but never truly match. But I want to tell you a secret. Well maybe not a secret, it’s actually kind of obvious if you stop to think about it.

She isn’t a witch, or a werewolf, or even a vampire. She’s more of a muggle really. Just like us. Is she amazingly talented? YES. Is she unbelievably successful? YES. But she didn’t start out that way. Here are some facts about JKR that you probably know but may have never thought of in comparison to yourself as a writer.

So when bad things happen, when we get rejected, when we feel the indescribable drive to write, and when we make mistakes – we can rest assured that at the very least we are in good company. That those things don’t make our goals unreachable. On the contrary those are things that make us writers.

So thank you, Ms. Rowling. For Harry and for being such an incredible example to the rest of us.

And thank you, Lisa, for sharing with us today!

Did you all know that JK Rowling's first book was reportedly rejected by 12 publishers?  And that her first print run was only 500 copies!?

What do you all think of the human face behind the Superhero Phenom mask?

Bio: Lisa Gail Green's work includes numerous short stories and poems. The latest are,"Identity Crisis," which can be found in Gods of Justice, and "Cursed," featured in the anthology Playthings of the Gods. Lisa lives in Southern California with her husband and two kids, and no matter how much she resembles that one superhero you're thinking of, she vehemently denies any connection. Find her online at her blog, Paranormal Point of View and Twitter.
Posted by S.P. Sipal at 9:54 AM