Try a Trelawney: When Will J.K. Rowling Announce Her Next Book?

Follow the updates at new post! Click for new post here.
Also, we have two predictions in the comment trail below that hit the mark or came very close.  First off, author Lisa Gail Green predicted the next release would be for adults! Yay Lisa!!  And I was 9 days off predicting when the book would be announced as I had chosen February 14 for an announcement.


Original post started here:
Many of you may remember that at the premiere of Deathly Hallows part 2 this past summer, J.K. Rowling mentioned in an interview that she had been waiting for the release of the last movie to move forward on a new book.


"I think always felt that I didn't want to publish again until the last film was out because Potter has been such a huge thing in my life. I've been writing hard ever since I finished writing Hallows, so I've got a lot of stuff, and I suppose it's a question of deciding which one comes out first. But I will publish again. And I feel in some sense this is a beginning for me as well as an end!" --JK Rowling

She has multiple books if she has to choose which comes out first.  As it's been over four years since the release of Deathly Hallows, and now the last movie is out as well, I feel fairly certain that she'll at least make an announcement this year as to a new release.

But what will it be?  We know from past interviews that she had at one point been working on a political fairy tale (whatever that may be) for younger children.  She's also mentioned that she was working on something for adults and has promised at some point in the future to do the ultimate Harry Potter encyclopedia.

I thought it might be fun to have a Trelawney thread of speculation.  In the comment trail below, cast your prophecy.  You can predict the date you think Jo will announce her next book, or the type of story that she'll publish next, or when the book will actually be released.  Or whatever. 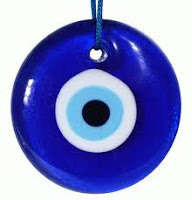 Whoever comes closest to hitting one of these will win a copy of either A Writer's Guide to Harry Potter or Mad-Eye's Magical Eye (a Turkish nazar boncugu shown on the right) to hang on your wall.  Your choice!

My prediction -- I think we might get a lovely Valentine's gift from Jo when she announces her next book, a political fairy tale for children, to come out in July 2012!

Also, you will not want to miss a fabulous opportunity provided this week by Jami Gold on her blog.  Throughout the week, she'll be hosting a Pitch Your Shorts opportunity with editors from Entangled Publishing reading the pitches and making requests.  So if you have a manuscript between 10,000 - 60,000 words, hurry on over to Jami's blog (after you cast your prediction below) and submit your pitch!