Through the Trapdoor -- JK Rowling's Blueprint for the Harry Potter Series

A couple of weeks back, I did a post, Mirror Mirror on the Series, showing how JK Rowling had plotted books five, six, and seven to reflect three, two, and one, with four as the hinge.  In putting that post together, I discovered another game she'd played, that's really more foreshadowing than it is a reflection. Jo foreshadowed key elements for the entire 7-book series at the end of the first.

Don't believe me?  Then take a look at this.

Chapter 16 of Philosopher's/Sorcerer's Stone, Through the Trap Door, takes the reader with Harry on a quest to stop Voldemort from capturing the Philosopher's Stone and obtaining eternal life.

There are several key gates/challenges along the way that Harry, Ron, and Hermione must pass in order for Harry to triumphantly face Voldemort at the end.  And each of these challenges relates, in order, to an upcoming book.

1) Neville, a Toad, and a Chamber of Secrets:

The first challenge Harry, Ron, and Hermione face, before they even leave Gryffindor Tower, is Neville.  But Neville is not alone.  He's carrying his pet toad, Trevor.  In fact, it's so important for the reader to know that Neville has Trevor that Jo mentions it twice.  Neville has gathered up his courage to face his friends and stop them from losing any more house points.  But Hermione casts a Petrificus Totalus spell on Neville, making him go all rigid and fall "flat on his face, stiff as a board."

A book later, we saw some other people struck with magic go all rigid, stiff as a board -- they too had been petrified.  This happened in Chamber of Secrets as students were attacked by Riddle and Slytherin's pet basilisk, who was born of a hen's egg hatched beneath a toad.  Maybe Hermione should have petrified Trevor as well when she had the chance**.

Then, on the way to the third-floor corridor, Harry, Ron, and Hermione run into Peeves, who though he can't see them, knows they're there and threatens to notify Filch.  He is only dissuaded when Harry imitates the Bloody Baron and threatens Peeves.

Ghosts figured prominently into the plot of Chamber of Secrets as well with Nearly Headless Nick's Deathday party and Moaning Myrtle's "guarding" of the entrance to the Chamber.

2) Prisoners of Devil's Snare and Dementors:

The second challenge the Trio faces also comes in a pair.  Hagrid's pet, Fluffy, a three-headed dog, guards a trapdoor that drops them onto Devil's Snare.  To get past Fluffy, Harry must play a bit of music from the flute Hagrid gave him for Christmas.  And when they drop onto Professor Sprout's Devil's Snare, it immediately snakes its tendrils around Ron and Harry's legs and arms, imprisoning them.  Only Hermione, the last to drop and the first to see the danger, can set them free with the light of a fire.

"Devil's Snare, Devil's Snare...what did Professor Sprout say?--it likes the dark and the damp--"
[Hermione] whipped out her wand, waved it, muttered something, and sent a jet of the same bluebell flames she had used on Snape at the plant.  In a matter of seconds, the two boys felt it loosening its grip as it cringed away from the light and warmth.


Sounds almost like casting a Patronus at a Dementor, doesn't it?  A Dementor who also lives and breeds in the dark and damp.

We first meet the Dementors in Prisoner of Azkaban, where Hagrid again has a fearsome pet, Buckbeak, who Harry is able to tame and ride.  And it is through Buckbeak, and the light of truth, that Sirius, a prisoner of lies, is finally set free.

Flitwick's challenge involves hundred of winged, flying keys, disguised as birds, where only one fits the door through which they must pass.  The Trio must fly high among the keys to seek out and catch the one key which will allow them to continue.  In a game of magical cooperation, Harry directs the other two and puts his Seeker skills to the test to identify and capture the true key.

In Goblet of Fire, Harry once again uses his flying skills to capture the golden dragon's egg, which is the key to the next challenge in the Triwizard Tournament.  Furthermore, in this book, we are introduced to some very special keys, portkeys, which carry Harry and his friends to the Quidditch World Cup, and then Harry and Cedric to face a rejuvenated Voldemort in the graveyard.  And finally, Pseudo Mad-Eye's disguise is removed to reveal the true face of Voldemort's most loyal servant, and the true Mad-Eye hidden in a trunk guarded by seven locks.

4) The White Queen of Death and the Noble Knight:

After Harry, Ron, and Hermione pass through the door guarded by keys, they are confronted with McGonagall's life-size, transfigured chess games.  Harry becomes a bishop, Hermione a castle, and Ron a knight as he directs his friends about the board.  Finally, Ron sacrifices himself to the white queen so that Harry can checkmate the white king and proceed.

In Order of the Phoenix, as the Order faces the Death Eaters in battle, a noble knight is indeed lost to a queen as Sirius is killed by Bellatrix, Voldemort's top female warrior, giving his life to protect Harry.  Harry then confronts Voldemort and, in the end, forces him out of his body.

5) Potions and Memories from a Half-Blood Prince:

The Trio then passes a foul-smelling troll, who has already been knocked out by Quirrell, who'd placed him there anyway.  They enter a room with a table holding seven bottles of potions--Snape's logic challenge.  Hermione figures out the riddle, which allows her to determine which bottle is safe for her to drink to go back, get Ron, and summon the absent Dumbledore, and which one is safe for Harry to drink in order to proceed through the flames and face Voldemort alone.

In Half-Blood Prince, Snape is once again the object of a logic puzzle.  Harry is in possession of Snape's old potions book, but doesn't know who the Half-Blood Prince is to whom it belonged.  Not only must Harry figure out who is the potions master in this HBP challenge, but he is confronted with seven vials.  Instead of potions, however, these vials contain memories providing insight in Voldemort's past to prepare Harry for the ultimate confrontation.

6) Facing the Conflict of Desire and Sacrifice: 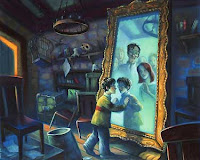 Finally, Harry stands face to face to face with The Man with Two Faces.   He looks deep into Dumbledore's Mirror of Erised and sees himself in possession of the Philosopher's Stone.  And when Quirrell/Voldy finally attacks, he cannot touch Harry because of his mother's sacrifice to save her son's life.

Likewise, in Deathly Hallows, Harry must finally face Voldemort alone, but capable this time, after having passed through the prior challenges, of finally defeating him.  After an internal struggle of facing what he truly desires, Hallows or Horcruxes, an intense challenge forced upon him by Dumbledore, Harry sacrifices himself to save others. As a result, he gives those he loves the same protection from Voldemort which his mother gave him.

I don't know about you, but I find it amazing that JKR had plotted her series so in depth from the beginning, that she was able to include all these clues in the first book.  Foreshadowing like this comes from hard work and preparation.  It is because Jo took the time to plot out her whole series before publishing Philosopher's Stone, and knew intimately what was to come, that she was able to drop these clues in from the very start.

What's more, JKR didn't stop with setting the stage for key elements in each of the books to come, but she also foreshadows the final battle.  Each of the professors who provided a protection at the end of Philosopher's Stone, also provides a weapon against Voldemort during the Final Battle.

**Although it could be argued here that these points of comparison are more of a wrap-up, where she made the parallel links work at the end rather than having foreshadowed at the beginning.


A couple of other foreshadowed tidbits from the first book:


I love how JKR plays with her reader by inserting these clues and making these connections.  She used tricks like this to help set the tone and establish the rules.  Jo wanted her reader to play along with her.  While she wanted the reader deeply invested in the emotional arc of the story and characters, she also wanted their minds fully engaged in analyzing the mysteries and finding the Easter eggs hidden about.

I'm really curious, have any of you ever tried playing a game with your readers like this?  Also, what other links between the ending of PS/SS and the upcoming books did I miss?


** The note about Hermione petrifying Trevor is meant as a joke as the basilisk is several hundred years old. But what JKR is doing here is providing a slight link from one toad to another.  This is an example of her running bit clues.