Never Trust a Character! (If You Want to Find a Clue)

This post is part of the Mystery Plotting series, in which we are examining, one by one, techniques JK Rowling used to hide clues and plot her mysteries.

As a writer, how do you feed misinformation to your reader?  Not everyone or everything in life is straightforward and honest, nor should it be in our stories.  We need those red-herrings and those twists and turns of a surprising plot to keep our audience on edge and reading at a fast pace.  But readers also feel cheated if an author deliberately misleads them without properly motivating the "lie" or providing clues that they have done so.

Enter the voice of your characters.  Characters can lie any time for various reasons -- but they MUST be well motivated.  Whether through an outright lie, sly misdirection, or inherent misunderstanding -- adversaries, friends, and even the main characters themselves can misrepresent the truth through what they say or what they think.  As writers, it is our job to ensure that their reason for lying or misleading the reader is a good one.  As always, JK Rowling provides wonderful examples of all these.

Perhaps the easiest, and therefore most obvious method of character lies is through the mouth of the villain.  However, if the villain is clearly marked as such and his antagonistic position against the hero clearly defined, any words he utters will always be suspect.

No, it's much more subtle to have well-intentioned characters feed misinformation due to their own lack of knowledge or false perceptions. How often did Ron and especially Hermione poo-pooh Harry's growing belief that Draco had become a Death Eater in Half-Blood Prince.  Draco was too young, they said.  Harry was just letting his own hatred of his nemesis persuade him to see something that was not there.  And, yet, Harry was right.  But if the reader had listened to the logical but wrong perceptions of Hermione and Ron, they were in for a surprise.

We also saw in an earlier example how Percy fed the reader the clue that Ginny was very upset about Harry being accused of opening the Chamber of Secrets.  At the same time, Percy distracted us as to why his sister was truly upset through his own wrong understanding of the situation.  Of course, how in the world would sixth-year Prefect Percy understand first-year shy Ginny's inner turmoil?  Who would have suspected that she was upset about setting the Basilisk loose herself?

Mad-Eye Moody, as impersonated by Barty Crouch, is the chief antagonist throughout Goblet of Fire.  However, this semi-mythical retired Auror is brought onto the scene through other characters' POVs, which while they may not be false, are definitely leading the reader away from the truth in this situation.

First, Cedric Diggory's dad, who works at the ministry, informs Mr. Weasley, and the reader, that the day before Mad-Eye is to take up his new position (at Hogwarts), that an intruder tried to get into his house and was attacked by his charmed dust-bins.  But, notice Mr. Diggory's influential POV regarding Mad-Eye:

"Arthur, you know Mad-Eye," said Mr. Diggory's head, rolling its eyes again.  "Someone creeping into his yard in the dead of the night?  More likely there's a very shell-shocked cat wandering around somewhere, covered in potato peelings...I'll bet he leapt out of bed and started jinxing everything he could reach through the window."


Mr. Diggory definitely doesn't believe that Mad-Eye might have truly been attacked, does he? So, neither does the reader.

A few minutes later, around the breakfast table, the rest of the Weasley clan's POVs add to our perception of Mad-Eye:

An while Charlie asserts that "Half the cells in Azkaban are full because of him," he also states that "I heard he's been getting really paranoid in his old age.  Doesn't trust anyone anymore.  Sees Dark wizards everywhere."

Moody becomes the coolest Defense Against the Dark Arts professor ever.  Students line up outside his door to ensure they get a good seat in his class.  Thus, because we've been told he's paranoid for good reason, and in the students' POV he's the coolest thing to hit Hogwarts this year, when in the Three Broomsticks Harry notices Moody drinking from his flask yet again, the reader is properly prepared to believe along with Harry the falsely planted reason:


Moody had told them all during their last Defense Against the Dark Arts lesson that he preferred to prepare his own food and drink at all times, as it was so easy for Dark wizards to poison an unattended cup.

Who would such a man of the ultimate deception?  Through all this build up and then the final revelation, JKR has masterfully manipulated her characters' POV in the direction she wants to influence our own perception of her prime, hidden antagonist.  And notice, the characters' all believe what they say because these perceptions are true for the real Mad-Eye!  Because they are convinced, we are as well.

Throughout Goblet of Fire, JKR continues to utilize false perceptions from the characters to both reveal and conceal clues.  In an example pointed out to me by a participant in one of my workshops (thanks Suzanne!), we're going to look at a more subtle example from Chapter 27, after the second challenge of the Tri-Wizard Tournament.  Snape confronts Harry during Potions class about stealing ingredients from his cupboard, which Harry angrily denies.

"Don't lie to me," Snape hissed, his fathomless black eyes boring into Harry's.  "Boomslang skin.  Gillyweed.  Both come from my private stores, and I know who stole them."
Harry stared back at Snape, determined not to blink or to look guilty.  In truth, he hadn't stolen either of these things from Snape.  Hermione had taken the boomslang skin back in their second year -- they had needed it for the Polyjuice Potion -- and while Snape had suspected Harry at the time, he had never been able to prove it.  Dobby, of course, had stolen the gillyweed.
"I don't know what you're talking about," Harry lied coldly.
"You were out of bed on the night my office was broken into!" Snape hissed.  "I know it, Potter!  Now, Mad-Eye Moody might have joined your fan club, but I will not tolerate your behavior!..."


Then Snape threatens Harry with the truth potion, Veritaserum, to which Harry "wondered whether he ought to take a leaf out of Moody's book and start drinking only from a private hip flask."

Look at all the clues JK Rowling works into this short passage.  Snape is missing ingredients in his private stores for Polyjuice Potion.  We know, because the Trio brewed it up two years ago, that Polyjuice Potion allows one wizard to impersonate another.  Snape's office was broken into on the night some of these ingredients were stolen.  And who else was up that night, as JKR so slyly has Snape remind us? Mad-Eye Moody, who also just happens to drink solely from that private hip flask already mentioned and seen repeatedly.

An overwhelming amount of clues, is it not? And yet, how many of us slipped blithely by this because of the false perceptions from both Snape and Harry that fed us these clues?  Snape believes the culprit to be Harry, which Harry confirms by remembering that Hermione did steal the boomslang skin two years ago.  But notice that a time-frame is not specified by Snape.  Why would he be talking about boonslang from two years ago right next to the gillyweed that Harry acknowledges is recent?

Or, in the words of Suzanne who pointed this out to me, the reader "naturally skipped  right over all the Polyjuice ingredients -- BECAUSE HERMIONE DID STEAL THEM TWO YEARS AGO!!! -- and it never dawned on me that Snape undoubtedly meant THIS YEAR, when of course fake-Moody was having to replenish his supplies. It wasn't until just today that I realized this was a huge clue I had always overlooked because I always focused on the Gillyweed being stolen by Dobby for the second task. Brilliant!"

Also, Snape's assumption that Mad-Eye was up and about to help cover Potter's tracks and Harry's earlier revealed perception about why Moody drinks from his hip flask persuade the reader to believe the same.  Still, Mad-Eye is juxtaposed into this scene twice, and we know how JKR uses juxtaposition to place clues.  So, in this example, JKR uses juxtaposition to hint at the person who is stealing ingredients and brewing Polyjuice, but uses false perception to distract from these same clues. 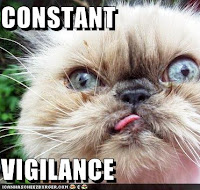 In the words of Mad-Eye -- Constant Vigilance!

As writers, we need to always remember that our characters do not always need to tell the truth, whether from telling an outright lie to believing untruths.  But there's a very fine line between an unfair lie and a well-played twist.  The "lie" or false information must be both well-motivated and a clue, subtle thought it may be, must be left toward the truth. These are tools we can use to not only create character conflict and deepen character development, but also to help reveal and conceal any mysteries we have within our text.

Have you used a character's false POV to hide a clue for your reader?  How did you motivate your reader to either lie or misunderstand the truth?