However, unlike the First and Final Chapter series, I've been covering mystery plotting on this blog for quite a while and already had an introduction and posts up.  I'd just not followed it from beginning to end in complete (or semi-complete) detail, which is what my aim is through the next few weeks.

Therefore, I'm re-starting at the beginning by re-posting the introduction to mystery plotting with links to a couple of posts that are already on the blog, so you can catch up.  Then, we'll proceed onto new posts for the rest of this mysterious journey! 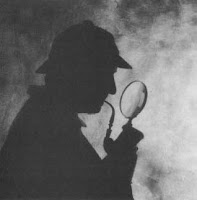 Over the course of seven books, JK Rowling plotted a complex mystery embedded in the frame of a fantasy adventure. Ms. Rowling expected a lot from her readers, and she got it. She expected an active participant to pick up on her clues and to follow their trail. What she got was a world full of Harry Potter readers who not only jumped in enthusiastically to sleuth out the clues, but also delighted in stringing them together to plaster the Internet with theories of what was yet to come.

There are three central questions to the Harry Potter mania which drove the search for clues:

1) What exactly happened in Godric’s Hollow?
2) Where did Snape’s loyalty lay? and
3) How would Harry defeat Voldemort?

Although the three questions are simple, the answers are quite complex. JKR built an elaborate world, richly detailed, that is full and complete. What is amazing about her construction is that every aspect of the world, each character, has something to contribute to these three simple mysteries. The clues could be, and indeed are, hidden everywhere.

While JKR used multiple techniques for hiding her clues, overall they can be categorized under that old reliable magician’s trick: sleight of hand.

Misdirection is perhaps the most important component of the art of sleight of hand. Using misdirection, the skillful magician choreographs every movement in a routine so even the most critical and observant spectators are compelled to look where the magician wants them to. (source)

JK Rowling is the indeed the master magician!  While planting her most important clues, she diverts the readers’ attention away from it and to her carefully plotted distraction. Aside from a few obvious hints meant to knock the reader on the head to hunt for more, Jo almost never plants a clue without also providing the words to distract the reader from it.

I'll give you one quick example here, but the rest of this series will give many more:

In Chamber of Secrets, in Chapter 9, The Writing on the Wall, the Trio enter Myrtle's bathroom for the first time to hunt for clues as to what petrified Mrs. Norris.  Once they leave, Percy confronts them, chiding them for returning to the scene of the crime.

"Why shouldn't we be here?" said Ron hotly, stopping short and glaring at Percy. "Listen, we never laid a finger on that cat!"

"That's what I told Ginny," said Percy fiercely, "but she still seems to think you're going to be expelled; I've never seen her so upset, crying her eyes out. You might think of her, all the first years are thoroughly over-excited by this business--"

"You don't care about Ginny," said Ron, whose ears were reddening now. "You're just worried I'm going to mess up your chances of being Head Boy."

I imagine Jo chortling to herself as she wrote that sentence about "no more detective work." The italics there are hers, not mine. Of course she's wanting her reader to do exactly what she's having Percy forbid the Trio from!

As for the sleight-of-hand in this example, I see two types.  First, the clue is, of course, Ginny's extreme reaction to what happened to Mrs. Norris.  However, JKR distracts the reader from Ginny's emotional reaction with a fight between Ron and Percy.  She also uses a characters' own false perceptions to distract us from the real reason why Ginny may be upset.  According to Percy, who is a Prefect and talked with Ginny so should be trusted to know, his sister is upset because all first years are and she's afraid Ron will get expelled.


There are various methods Jo employs for creating these types of diversion. Here are some I've uncovered that we'll study to help improve our own writing. Those that are hyperlinked have already been covered on this blog, though I may revisit some of the older ones with some fresh examples.

A Dozen+ Golden Eggs for Tricking Your Reader:

We'll break apart each of these steps in separate posts over the next few weeks. I may not do them back-to-back, but should eventually cover them all with examples. Just keep following the Mystery Plotting label.

As a writer, you must play fair with your reader. You must leave clues.  But the sly author will do it in such a way so as to make it difficult for the reader to see them clearly on a first read.

Plotting a mystery is a very fine balancing act. If the author leaves insufficient clues to give the reader a shot at solving the puzzle, the reader feels cheated. However if the author makes the clues too obvious, the reader also feels cheated out of the pleasant surprised “gotcha” at the end. The evidence is overwhelming that JKR has walked that tightrope gracefully and masterfully and has not cheated her readers, but left them with many hours of happy sleuthing, and definite pleasant surprises.  Through it all, sleight-of-hand was her technique of choice.

Have you considered your own sleight-of-hand in plotting your stories? Have you tried to provide distraction to whatever clue you've inserted in your text?