A Rubeus by Any Other Name...

Would NOT smell as, well, ah...sweet! 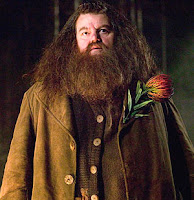 In JK Rowling's deft hands, character names are more than just a reflection of the personality of its owner.  While many writers like to pick apart JKR's prose for overuse of adverbs or other small infractions, one technique she is almost universally admired for is her ability to craft unique, meaningful, and enchanting names.  I mean, siriusly, can you imagine Rubeus Hagrid as a Robert Harris?  Or Albus Percival Wulfric Brian Dumbledore as Albert Davis?

But JKR's talent was not just in giving her characters a whimsical, though accessible, name which made them seem fully a part of their magical world.  It was most importantly her ability to craft a name which carried hints of the mystery surrounding that character.

For example, many fans (myself included) are still convinced that when the Harry Potter Encyclopedia comes out, Dumbledore's animagus form will be revealed as a bumblebee.  After all, Dumbledore is an old English word for bumblebee, and he always seemed to be humming about the place.  And can you imagine that a former Transfiguration professor and a wizard as skilled as Dumbledore never learned to transform himself?

Years ago, when the HP books were new and fans were first beginning to share their enthusiasm over the Internet, the main clues being discussed were the meanings behind names.  Readers quickly caught on that many came from myths; others from places; some were named after flowers or stars; and then there are JKR’s own creations, combinations of words with new meanings (such as Umbridge, a portmanteau from umbrage and bridge, as she provided a connection from the school to the ministry). All types of names were strikingly relevant to the character or object they represented, and most held some sort of clue regarding that character's role in the series.

These are all fairly simple examples, accessible to the average reader with just a quick quest to the Google oracle. However, there was one set of names which carried a stronger set of clues to the heart of the mystery surrounding Harry--his alchemical journey.  In alchemy, to turn base metal into gold, there were seven stages divided into three phases--black, white, and then red.  The black phase must “die” for the white to begin, then the white falls away for the red. At last, the red phase produces the gold of the Philosopher’s Stone.

Now look at these three names:

First Sirius died, then Dumbledore, then finally, after a symbolic death from his motorbike, Hagrid was left to carry the body of Harry out of the Dark Forest of his enlightenment for his final confrontation, his golden moment in the rising sun.

Think of ways you can give extra meaning to your character names without creating something that looks like D'Oro'dindul'gum.  JKR's names, while different, were still accessible. Also, be careful in choosing names with meaning that it also fits the character, story, and time period in which the story takes place.

Have you created a character name lately you're especially proud of?

This article is part of the Sleight of Hand series with tags of  Mystery Plotting and Clues.