Pottermore Quill Quest is On!

Update!, the Quill Quest has been announced. I've started a new post to follow the clues as they are released. Check here: Quill Quest is ON!! 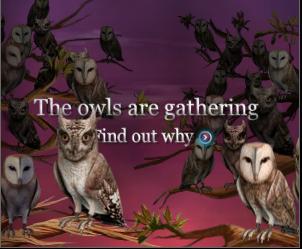 Alright, I may be jumping the gun a bit, but our hunches from the last few weeks of hunting clues seem to be paying off.

HPSupporters just pointed out that in the Pottermore blog post revealed today there is a hidden, invisible link.  And guess what that link points to?  An interview where JK Rowling discusses how names of students-to-be are written down by a magical quill in a book that record all magical births.  It is from this book that invitations to Hogwarts are sent out when they reach their 11th year.

So, the Quill Quest seems to be shaping up to be a very real thing.  Though I'm not sure it will be limited to finding quills.  It seems to me that there is a wand disguised as a limb on the Pottermore Flash (above) that many of the fansites are sporting.  Plus, I know from the LeakyCon Pottermore preview that we will document our path through Pottermore by points of lights on 7 limbs, one for each book.

I think when July 31 rolls around, we'll be definitely hunting 3 quills in fandom, and perhaps a wand as well.

What do you think?  Did you see the hidden link?

About the wand disguised as a limb theory:  Look at the Flash above.  See the largest owl who is front and off-center to the left?  Now, look at his talons.  In the working Flash, he lifts and lowers those feet.  And his left talon seems to be gripping a very straight, long stick, while all the other limbs are bent or crooked.  That limb may actually be a wand.

This would be keeping with the original Pottermore Owl Tree where three quills were disguised as leaves.  You can see them below.  They are the bottom three on the left side: 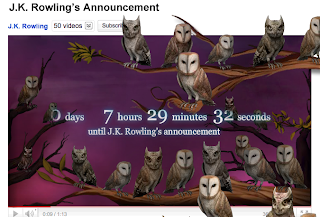 Update 7/20: Roxanne makes a very good point in the comment trail.  JK Rowling and the Pottermore team are smart enough to realize that if the quest test for early entry is something as simple as finding 3 quills (and possibly a wand) once they are found by one person, the locations will be shared all over Fandom.

Therefore, there must be something to the early entry test that can be individualized and not simply shared.  Roxanne suggests a test of skill of some sort.  I'm thinking that once you find the quills and wand you have to do something with them.  Perhaps there will be a writing test! :-) (just kidding...I think!)

Siriusly, what do you do with a quill, especially at Hogwarts?  You write.

Confused?  Not understanding what we're talking about regarding Pottermore, early entry, and the Quill Quest?  Read back over the Pottermore posts here to see the build-up to this article.
Posted by S.P. Sipal at 3:48 PM