In an earlier post, we discussed how the magical JK Rowling uses diversion to masterly distract the reader from any clues which she lays. She employs several techniques for drawing our attention away from these tidbits, which we can utilize in our own stories. In this post, we'll look at one.

One way you can hide a clue is to make the person who reveals it look like a complete idiot. For JKR, Trelawney and Luna seem to be the biggest target for hiding these sly nuggets. They simply spout so much nonsense, each in her own way, that you don’t expect them to ever get anything right. Fudge is a similar character. So, once a character has been discredited, he or she becomes a prime candidate for laying an important clue.

Of course, what Trelawney’s most famous for are her two “true” prophecies--the one that led Voldemort to Harry on that fateful Halloween, and the one about Wormtail returning to his master--but she also makes an accurate prediction in Harry’s very first lesson:

"My dear," Professor Trelawney's huge eyes opened dramatically, "You have the Grim."
"The what?" said Harry.
He could tell that he wasn't the only one who didn't understand; Dean Thomas shrugged at him and Lavender Brown looked puzzled, but nearly everybody else clapped their hands to their mouths in horror.
"The Grim, my dear, the Grim!" cried Professor Trelawney, who looked shocked that Harry hadn't understood. "The giant, spectral dog that haunts churchyards! My dear boy, it is an omen -- the worst omen -- of death!"
Harry's stomach lurched. That dog on the cover of Death Omens in Flourish and Blotts -- the dog in the shadows of Magnolia Crescent...

Trelawney is presented as a charlatan, McGonagall discredits her entirely and tells Harry she’s predicted a death every year, and the reader knows quite well Harry’s not going to die in book 3 of a 7-book series (which JKR had already announced). So, who would pay attention to the very real clue that death is attached to the Grim? It’s not Harry’s death that’s being foretold, however, it’s the dog’s death...it’s Sirius’. The Grim, Sirius’ animagus alter-ego, finally catches up to him at the end of OotP. 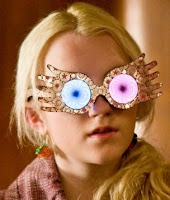 Taking Trelawney seriously is one thing...but Luna...? Still I think Luna was on to something big. From her (or her father’s) accusations that “Fudge’s dearest ambition is to seize control of the goblin gold supply” (p. 174, OotP Bloomsbury), to Scrimgeour being a vampire (p. 294, HBP, Bloomsbury), to the Aurors as part of the Roftang Conspiracy to “bring down the Ministry of Magic using a combination of Dark magic and gum disease” (p. 299, HBP, Bloomsbury), she seemed to be hitting rather hard that something was rotten within the ministry and a battle for power was imminent. In Deathly Hallows, one of the first things to happen was the fall of the Ministry, toppled from within.

So, if you’ve done the work to create an outlandish character, utilize one of JKR’s techniques and put the character to extra work by giving her an outlandish clue to hide that the reader will never suspect. Make sure she truly does spout nonsense most of the time, or the reader will catch onto you and start taking your character seriously. Remember, it’s always sleight-of-hand, distraction, that you’re going for.

Do you have a clue you need to plant which would be great coming out of the mouth of a character your writer won't take seriously?  If so, please share in the comment trail!

This article is part of the Sleight of Hand series with tags of  Mystery Plotting and Clues.