The Wide-Angle View of World Building

Most readers cite JKR's world-building as the lure that drew them into the Harry Potter series to begin with. JKR riddled the text with so much fabulously imaginative, fun, and complete detail that readers fully believed, for the few hours they were engrossed in the books, that they were indeed living in a world among wizards and witches, goblins and house-elves, giants and ghosts, and basilisks and hippogriffs.

JKR uses many layers to create her world. Her rich details come into focus through both a wide-angle and zoom lens. The reader experiences these angles simultaneously, but in this post, we'll look at the wide.

I find it highly significant that Harry’s introduction to the Wizarding World was not at Hogwarts but at Diagon Alley. Think about it--JKR could have had Harry’s books and supplies provided by the school once he arrived. But she wanted Harry, and the reader, to experience from the start that the Special World Harry was entering was full and complete and only diagonally set apart from our own.

At Diagon Alley, in that first visit with Hagrid, Harry encounters: 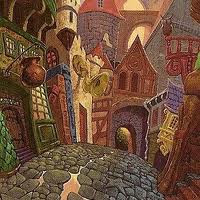 This list is by no means exhaustive. The reader, and Harry, experience a vibrant world thriving and performing on a daily basis. A world full of people who are going to be affected by Harry’s choices. Some of these people would live or die as a direct result of Harry’s actions.  And if the reader is going to be affected by their fate later on, they need to experience them and their world personally beforehand.

Have you fully realized the world your hero or heroine inhabits? Have you built the bank, the prison, the government, the newspapers, the books, the schools, the playgrounds, the hospitals, the homes, the shops ... even if your reader may not ever go there? A variety of settings not only provides the feel of a fully developed world, but helps prevent the reader from getting bored.

What other wide-angle settings from Harry Potter can you remember?

Be sure to check out JKR's Zoom Angle of Worldbuilding as well.

** Credit to Neville at Sodahead.com for the Diagon Alley picture.
Posted by SP SIPAL at 7:22 PM