Getting Your Themes Across - The Unforgivable Curses

If you want to know what JKR thinks the worst thing one human can do to another is, the answer is right there on the page in Goblet of Fire, chapter 14, "The Unforgivable Curses."  JKR uses a school lesson to give the reader insight into what is to come in the remaining books, as well as a hint toward the deeper meaning underpinning her stories. 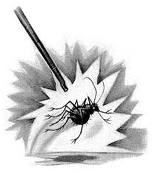 Pseudo Mad-Eye Moody, in his first Defense Against the Dark Arts class in Harry's fourth year, uses spiders to teach the students what they need to be on guard against:

1) the Imperius Curse -- Ron mentions this one.  It is cast with "Imperio," and gives the witch or wizard total control over the other person.  Mad-Eye says it takes real strength of character to throw off this curse.

2) the Cruciatus Curse -- Neville names this one, and we later learn that this was the curse which drove his parents insane.  Indeed Barty Crouch, Jr., aka Pseudo Mad-Eye, was one of the Death Eaters who is responsible for leaving Neville essentially an orphan.  Uttering "Crucio" causes total and devastating pain.

3) Avada Kedavra -- As Hermione informs us, is the Killing Curse.  There is no defense against it, and only one person is known to have survived it.  Harry.

Before the end of the series, we will see these curses used by both Death Eaters and good guys.  Harry himself will use the Imperius Curse when he, Ron, and Hermione break into Gringotts in Deathly Hallows.  And at the end of Order of the Phoenix, after Bellatrix kills Sirius, Harry tries to cast the Cruciatus Curse at her, but discovers he really doesn't have what it takes to cause another person serious pain.  Later, he attempts to use it against Snape after he killed Dumbledore at the end of Half-Blood Prince, then succeeds in using it briefly against Amycus Carrow in Deathly Hallows in defense of Prof. McGonagall.

Presented in ascending order of greater offense, JKR thus informs her reader that, in her opinion, the worst things one person can do to another is to control them against their will, cause them devastating pain, and kill them.  She has stated in interviews that she takes death seriously, and that is why you do not see random and casual killing in her stories.  Until the final battle of Hogwarts, each death is presented in such a way as to make the reader truly feel the utter and senseless loss.

JKR has also let her reader know throughout the series what she believes about choice:  "It is our choices, Harry, that show us what we truly are, far more than our abilities." (PS/SS)  That's why taking away one's free will is including on a list with pain and death.

So, with this bit of creative worldbuilding, JKR has created an effective tool for summarizing some of her own key beliefs, crucial themes to the story, and giving clues as to what is to come.  By studying her technique, we see that not only is it truly great to work with themes as a writer, but what's even more cool is when these themes can be inserted openly into the story in a creative, interesting, and most importantly, non-preachy manner.

As a writer, if you were to create your own list of 3 Unforgivable Curses, what would they be?  Would you include the same ones as JKR, or would yours have a different construction?  How would they fit into your current WIP?

Have you created your own piece of worldbuilding to insert into your story that gives your reader insight into your themes and foretell what is yet to come?  And having created such a tool, who will use it?  How will it look different from use by your hero to your antagonist?

Email ThisBlogThis!Share to TwitterShare to FacebookShare to Pinterest
Labels: Themes