Captain Neville and his Crew of Bodyguards

Bill Weasley worked for Gringotts as a curse-breaker in Egypt. The whole Weasley clan visited Bill in Egypt before the beginning of Prisoner of Azkaban. The referee for the Quidditch World Cup was Egyptian. The tour Dumbledore's old friend Elphias Doge took once leaving Hogwarts included a stop in Egypt to observe the experiments of Egyptian alchemists. And we must not forget that Fawkes the phoenix and the sphinx in the Triwizard maze have their homes in ancient Egypt. 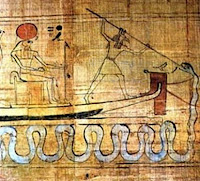 Think these Egyptian references are just casually tossed in for a bit of exotic flavor? Then you don't know JK Rowling.

JKR points the readers' attention to Egypt for a very deliberate purpose.

Ancient Egypt, as the mythical home of alchemy under Thoth, was a source for many of JKR's subtextual mythical allusions. In Dipping Into the Universal Well, I documented how JKR used the myth of Egypt's holy family, Osiris-Isis-Horus, to enrich and deepen the story of Harry's past and his conflict with Voldemort, who, as the murderer of Harry's parents is likened to Seth as the killer of Osiris and seeking to kill Horus. Indeed, Harry's story comes to conclusion with his defeat of Voldemort, which restores order and peace to his divided land, just as when Horus defeated Seth.

There is a different myth involving Seth which I would like to explore further as it relates more strongly to the ending of Deathly Hallows. Seth (sometimes spelled Set) is a complex figure in ancient Egyptian mythology. In his earlier forms, he was a protector of the great sun god Ra (Re), journeying with him on his daily voyage in his solar bark across the heavens of day and through the dark underworld of the night. Seth's job was to fight off the great and evil serpent Apep, who battled daily to swallow and kill Ra, and thus plunge the world into the darkness of death and despair.

Apep was the most feared mythical creature in all of Egypt. The dead were buried with amulets and spells to use against him as it was believed that Apep traveled in the Underworld seeking with his army of fiends to eat the souls of the dead. (The original Death Eaters). While Apep's followers were known as the "Children of Rebellion," those special gods who protected Ra were sometimes called the "Children of Horus" (Budge).

However, Seth was also the god of storms, the dessert, and chaos, and partly due to political reasons, over time, his religious cult gradually weakened. Seth became a darker god, associated in evil characteristics with Apep rather than as Ra's protector fighting him off. Eventually, Seth and Apep were seen almost as one.

Can you see yet why Voldemort killed Snape via a bite from Nagini rather than Avada Kedavra Snape himself?

While in the earlier Osiris-Isis-Horus myth allusions, Voldemort is likened to Seth as the murderer of Osiris and attempted killer of the baby Horus, in this solar bark myth Seth becomes Snape. Who but Snape does daily battle interceding between the solar god (either Dumbledore or Harry, depending on how you look at it) and the serpent-man, destroyer of lives and souls, Voldemort? Snape even boasts in Order of the Phoenix that it is his job to play the double agent, to battle where no one else dare go.

As Seth is darkened throughout the millennia due to the changing political powers around him, so Snape is viewed darker and more evil as a result of the actions demanded due to his allegiance to Dumbledore. Snape is shown as less a trusted companion of Dumbledore and more as a true Death Eater and murderer.

In the Ra-Seth-Apep myth, the only way the great Apep can possibly hope to get to Ra and finish him off is to kill off his greatest protector first. Thus Nagini, the pure embodiment of Voldemort's Apep-like evil, is the one who deliver's Harry's last protector his final death blow. 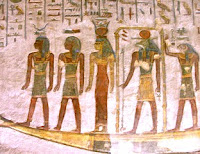 But Ra did not travel in his solar ship alone with only Seth for protection. Ra had friends, other gods who traveled along on his daily journeys to assist when confronted by storms and other natural disasters. These "children of Horus" guarded Ra and ensured that he successfully completed his journey.

As Harry approaches his final destination in his quest to eliminate Lord Voldemort and restore order and peace to the wizarding world, he enters Hogwarts in a most unusual way. And you can guarantee, when JKR writes something that seems slightly off, she's up to something tricky.

A portal opens up behind the painting of Ariana revealing "smooth stone steps on the other side: it looked as though the passageway had been there for years. Brass lamps hung from the walls and the earthy floor was worn and smooth; as they walked, their shadows rippled, fan-like, across the wall." (p. 461, Bloomsbury)

Once they arrive inside the Room of Requirement, Harry couldn't recognize the room. It now looked like an enormous interior of "a particularly sumptuous tree hours, or perhaps a gigantic ship's cabin. Multicoloured hammocks were strung from the ceiling and from a balcony that ran around the dark wood-panelled and windowless walls." (p. 464, Bloomsbury).

The portal between Aberforth's Hog's Head and Neville's newly commissioned Room of Requirement appears of stones washed smooth from centuries of water, with watery ripple-like shadows fanning the walls. Once inside the room, it as if Harry and friends have boarded a ship, with hammocks rather than beds and even a railing-like balcony that seems completely unnecessary in a room that does not open to the outdoors or even have windows. Even those brass lamps along the way hint at the brass fittings of a ship.

And Harry, Ron, and Hermione are escorted on board by the captain himself. "Neville's the man" Longbottom.

Longbottom. I'd long wondered why JKR had chosen such an odd surname for one of her lead characters. But, then, JKR is known for her odd names. Odd names that almost always carry a hint of deeper meaning.

While others have speculated that Longbottom is a nod to Tolkien's longbottom leaf tobacco, or perhaps drawn from an old English word that means powerful, a long bottom is also a type of boat. And the boats of ancient Egypt, which used many oarsmen, required long bottoms to navigate.

Stretching it, you think? Maybe. But the fact remains that JKR used ship imagery to describe the Room of Requirement and the boarding of not only of the Trio but all the family and friends who entered through this gangplank to fight the Battle of Hogwarts as well. Thus placing Neville, our captain, and the one man who truly "gets" the Room of Requirement, and also Harry's prophetic twin, as the man to slay the great serpent Apep now that Seth was gone.

According to the ancient Egyptian priests, who ritually mocked and killed an effigy of Apep to purge the land of evil, this great serpent could be killed by a process which involved "fettering" Apep, setting fire to him, or smiting him with a lance. Hermione tried to set fire to Nagini by use of the confringo spell in Bathilda Bagshot's house in Godric's Hollow, which caused so much heat it seared the back of Harry's hand. Voldemort himself fettered his pet in a protective magical cage. But it was Neville Longbottom who gave the great serpent her final blow by smiting her with Gryffindor's sword.

Through the efforts of this crew of friends, the children of Horus, Harry is able to face Voldemort in the Great Hall and as the red-gold sun arises over the horizon, put an end to the man who has plunged their world into darkness and chaos. The Sun god Ra has defeated the dark serpent and his solar bark can continue along its natural course.

JKR uses classical myths to help deepen her story and to provide a rich subtext of clues to guide her readers to uncover the mysteries of the series. You'll notice that aside from some names of creatures or characters (Minerva as the goddess of education and war) JKR rarely refers to the myths overtly. Instead, she uses key points of description, such as the Room of Requirement looking like a cabin of a ship, and paralleling of action and story, such as aligning Voldemort with the great serpent Apep, intent on killing Ra and plunging the world into death and destruction. Such subtle maneuvering created a layered read filled with modern and classic allusions which the reader delighted in exploring the depths of through many subsequent re-reads.

How would a writer go about doing this herself? For me, the process would have to start with the story you seek to tell. Not all stories will be suited to multiple layers of subtext and allusion. But if you think yours is and this technique appeals to you, then take a moment to observe the forest of your story rather than the trees.

Get an overview. What's your story about, its meaning, its theme?

One you've got a succinct understanding of your purpose, then compare your overview with other classical stories or myths you've heard before. Is yours the story of a heroine getting sucked into the underworld of despair and having to learn to fight her way out? Then you might want to look at Persephone. If you've got a romantic couple battling each other for trust, then consider Eros and Psyche. Or, if you're writing horror and you have a crazed, bloodthirsty woman on the loose, you might take a peek at Sekhmet.

Then, once you've got your connection, consider the similarities of your story, the points you can make in comparison. Can you weave a similar description in here or there? Can you have a plot point match its ancient cousin? Above all, can you do so without drawing obvious attention to what you're doing? The object of this type of subtext is not to say "lookee, see how brilliant I am," but rather to enrich your story's meaning and your reader's enjoyment.

Have you ever worked mythical allusions into writing your story?  If so, what points did you make in comparison?

This post is part of the Final Chapter series, which is now collected on the Kindle for ease of reading as The Boy Who Lived Comes to Life totals 100 pages!