Drawing the Final Curtain on an Epic Story

Chapter Thirty-Six, The Flaw in the Plan

This is the first in a series of posts to analyze the final chapter, "The Flaw in the Plan," of Deathly Hallows. 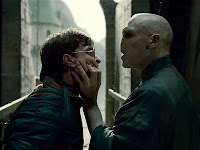 For any author, to end a story on just the right note is extremely important to the success of that book. However, to end a story that has spanned the course of seven long tomes is incredibly more complex and difficult to achieve. To draw the final curtain on Harry Potter, JK Rowling had to walk a very tight rope of wrapping up all loose ends of themes, metaphors, and character arcs, without dragging down the pacing of the plot.

To some extent, JKR was a victim of her own magnificent craft. She had created a vibrant world in such loving detail, with characters who lived and breathed so vividly in her readers' minds, that anything she did to draw it to a close was going to be somewhat lacking in her fans' hearts because they simply did not want the magic to end. Her rabidly loyal readers had been bewitched too long and too deeply by her story, their imagination engaged in the characters' lives beyond the story on the pages. They'd imagined (and written through their own fanfiction) the ending themselves in hundreds of ways. Thus, no one ending was going to satisfy every soul.

But it had to be done, and JKR did it true to herself, and true to the story she'd been telling all along.

Jo once said that she'd written the final chapter of the last book many years before and kept it locked up in a secret vault. I've often wondered if she meant the final chapter of the story with the defeat of Voldemort in the Great Hall, or the epilogue which tells of the characters' lives in the following years. Either way, while I know she has stated she remained true to the story she intended to tell, I'm sure some details changed along the way. We already know that Mr. Weasley got a reprieve and Lupin got the ax. But what else occurred, and how much of this will she reveal, eventually, in Pottermore?


However, for me, the crux of how successful JKR's final chapter was rested in the action off her hero, Harry Potter. As had been asked out loud since Dumbledore's revelation at the conclusion of Order of the Phoenix, but had been anticipated since the very first book -- would Harry have to kill to fulfill his hero's journey? How in the world would a woman who had treated death with such brutal honestly, and the killing of one's fellow human as a permanent blight on one's own soul, have her hero act heroically by taking another's life, even if that life happened to belong to a callous slayer of innocents?

The magical finagling which JKR went through to make this possible is simply mind-blowing, what with the complex quest for the Horcruxes and the incredibly detailed wand lore explaining how a wand pledges its allegiance. But in simple layman's terms, the final shootout came down to choice. Voldemort chose words to kill. Harry chose words to defend. Because Harry's "wand" was more powerful than Voldemort's, Harry won out, with Voldemort's killing curse backfiring on himself and doing him in. Harry's "wand," of course, represents the character of Harry himself, won by trial, temptation, and making the better choices. Even when given a chance by Harry during their final battle to repent and do the right thing, Voldemort could not choose the right. His soul was too wounded, his inner child too unloved. He could only recognize the power he hoped to gain, not the more potent love he had lost along the way.

From the very first placement of the Sorting Hat onto Harry's head, to Harry's choice to allow his father's betrayer to live, to his choice not to seek out the wand that he believed could save his life, to his final choice to walk into the Dark Forest to meet his death and lay down his life for those he loved, Harry had embodied JK Rowling's theme through her mouthpiece of Dumbledore: "It is our choices that show what we truly are, far more than our abilities." It is Voldemort's choice which kills him, and Harry's choice which insures his own survival.

But there is more...so much more. In this final chapter, JKR managed to bring full circle her great work throughout the series. In the next few days, we'll break apart this final chapter in more detail and study how she crafted it via:

Before reading Deathly Hallows, how did you imagine Harry would defeat Voldemort? How would you have done it differently?

I hope all those in the US are enjoying a fabulous 4th of July! And when you see the fireworks tonight, imagine Fred and George Weasley's Wildfire Whiz-bangs!
Posted by S.P. Sipal at 12:41 PM