Dipping Into the Universal Well

Do you remember back to your high school days (or maybe you're still in them!), when your English Lit teacher loved to drone on about the subtextual layers in works from authors such as Faulkner or Shakespeare? Did Shakespeare really intend in Hamlet for the poisoning of the old king through his ear to speak to the veracity of what one hears through them?  I mean really, what author could have intended every single one of those thematic details English teachers like to needle out and torment their students with on tests? ;-)

But honestly, I have to say that the sort of minute analysis I suffered through in English class was a drop in the cauldron compared to the frenzy I whole-heartedly engaged with once Harry Potter hit the scene. Talk about your theories and comparisons to every fable, myth, and work of literature ever created! Surely, JK Rowling couldn't have meant but a small fraction of them. 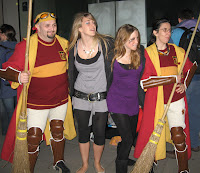 To better analyze how these subtextual references work for a writer, let me do what all writers do. Let me tell you a story...

This one concerns a young man often called the orphan because his father was murdered by an evil lord, who then tried to kill the young orphan as well. Fortunately, the orphan's magical mother was able to save his life, and so he grew to adulthood with the desire to right the great wrongs the evil lord had committed, avenge his father's murder, and reclaim his father's inheritance, which the evil lord had stolen from him. Numerous times the orphan faced the evil lord, but neither was able to finish off the other. For years, they battled bitterly and often violently to prove themselves in escalating challenges, which caused great trouble in their divided lands.  Finally, the orphan triumphed, and with his success, reunited the people.  The evil lord was banished for eternity.

But wait, you say.  You know this story.  It's Harry Potter!

And yet, the story I was conveying is an Egyptian myth several thousand years old.

Osiris was the wise deity ruler over Egypt with his wife Isis by his side. Together they brought prosperity, peace, and order to Egypt.  However, Seth -- Osiris and Isis' brother -- seeing what they had, decided to steal the throne for himself.  He plotted to kill Osiris and then Isis' son, Horus, as well. Powerfully magical, Isis was able to protect her son from Seth's evil attack.

Horus was destined to avenge his father's murder when he was old enough to reclaim his inheritance. Horus and Seth battled for many years until finally the combatants were called before the Ennead -- a council of nine prevailing gods -- to decide the matter by tribunal. Proving himself the better, Horus was awarded his father's position, reclaimed his birthright, and united the lands of Upper and Lower Egypt forever after. Depending on the version of the myth, Seth was either banished or killed.

Many of the details in the myths of Horus, Isis, Seth, and Osiris sound weird and out of place when compared to Harry Potter.  (For example, at one point, after Isis shows mercy to Seth, Horus lops off his mother's head). However, when you step back from the myths and look at their overall meaning, there are many points of comparison -- so many as to make it highly probable that JKR is deliberately weaving the Egyptian myth in as a motif. 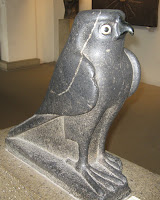 These are but a few of the comparisons that can be made between these two stories separated by centuries, cultures, and continents.  As writers, we can learn how to weave references into our work by studying how JKR wove hers so intricately. She made various points of comparison, but although she does point the reader in the direction of Egypt through Bill Weasley, she never directly refers to the Horus myth.

Please note that the Osiris-Isis-Horus myth is not singular but plural. As the story of their holy trinity was one of the most beloved of ancient Egyptians, and developed and changed over thousands of years, this myth exists in multiple versions.

Indeed this myth struck such a profound chord of meaning among the peoples and storytellers who came later, that it has been retold repeatedly throughout history, merely with costume, scenery, and prop changes to fit the new times.  What is Hamlet if not a story of a young man battling to avenge his father's murder and the usurper of his throne?  And in the animal kingdom, we have Disney's Lion King, where Simba must defeat his uncle Scar, who murdered Simba's father, in order to reclaim his rightful role as king.

These repeated myths are comforting to us. We know the stories; we know how they must end.  Good must triumph over evil; rightful order must be restored.  But because the world around us does not often show the results we seek, we must gain reassurance through our entertainment over and over, time and time again. 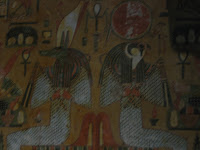 The long-enduring, oft-repeated mythic themes resonate because they tap into the universal subconscious that flows between peoples of all centuries, all continents, all cultures. If you, as a writer, tap into these themes, you instantly grow your market.

Harry Potter fans go crazy seeking out all the mythic references within JKR’s world. They can find connections to almost any myth or story ever recorded. Did JKR intend all the myth connections that fans find and thrive on? Of course not! Did she intend some--many--of them? Without a doubt.

The brilliance of using myth is that by using one, you instantly gain links to all the other storytellers who have come before you and referenced that myth as well.  In other words, if with Harry Potter JKR referenced the Horus myth, then she, perhaps inadvertently, also referenced Hamlet and The Lion King and many other stories based on this common mythos, as well.  As a writer, the wealth of the eternal flow of mythic literary connections can pour forth from your pen for the price of one dip.

So, go ahead.  Dip your bucket into your well. Connect through your own portal to that ever-flowing river of human subconscious. Study the myths, their hero’s journeys, their archetypes, their themes and conflicts. Find your connection, your voice, within their stories. Then play with them. Using JKR as an example, see how you can creatively weave myth into your contemporary story. 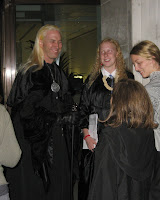 You, and your reader, will more deeply connect with the results.

Question: What myths have you woven creatively into your own story?

About the pictures: In July 2007, I was fortunate enough to speak at a Harry Potter fan conference in London during the release of Deathly Hallows. The pictures of the Egyptian artifacts were shot at the British Museum while the fans dressed as Harry Potter characters I took at the ginormous release party at Waterstone's in Piccadilly. The line of thousands of fans waiting to purchase the last book wound around several blocks, with gawkers (like me!) and news crews everywhere. It was a blast!
Posted by S.P. Sipal at 3:56 PM