Can you imagine the excitement of getting 3500 Harry Potters geeks together in one special place during the release of the very last Harry Potter movie?  Picture a scene of various Snapes slouching about, sneers on their faces, one with a very tall Bellatrix in prison garb by his side.  Or Dumbledore strolling through a hotel in full robes in Florida heat with his beard tucked into his belt.  Then there's Lucius and son Draco, looking very blonde indeed.  A heavily feathered human-sized Hedwig fluttered about, quite full of life.  But the costumes I liked the best, even though I didn't originally recognize what they were, were two Patroni (Patronuses?) with silver robes, silver paint, antlers, and even icy blue Christmas lights giving them a spectral glow. 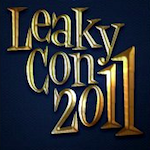 The Great Hall was well adorned with the house colors, stone walls, flickering candles, suits of armor...and able to sit over 3,000 attendees!  In this awe-inspiring setting, Wizards Wrocked, Puppets Palled, Evanna Lynch talked to eager fans, Starkids delighted, musicians and singers Final Battled, and more of Pottermore was revealed!  Unfortunately, they put a hex on all our cameras before entering the room. :-(

For me, the workshops were the big draw (because I'm an old fuddy-duddy...see I even still use the word fuddy-duddy).  And I saw several good ones.  Erin Sweeney did a wonderful presentation on Cracking the Planetary Code: Harry Potter, Alchemy, and the Seven Book Series as a Whole, where she covered a part of alchemy in the series I had not looked at in depth.  She showed how each book related to a progression of the alchemical planets and the gods they represented.  Wonderful and enlightening.

Then there was David Martin's workshop on Casting Your Patronus: The Representation of Mental Processes in Harry Potters Novels.  David, a computer guru who had graciously helped me out the day before during my workshop when my laptop refused to cooperate, presented an aspect of JK Rowling's technique which I had not considered or covered before.  In fact, I was so impressed with his presentation that I asked his permission to give a synopsis of it to you all here.  So, look for that in the coming weeks.

And then there was Mark Oshiro's talk from his popular Mark Reads Harry Potter blog.  Wow! Can this guy entertain.  He's sharp, witty, and insightful, and packed the room full of fans who overflowed into the hallway afterward to continue talking with him for at least an hour.  Do check out his blog when you get the chance.  he also "reads" and "watches" other fandoms on his ever-expanding site.

And then there was Pottermore.  Unfortunately the nargles plagued the Pottermore presentation at the beginning, as they did my workshop, and were slow to get the technology cooperating.  A lot of what was presented, especially in the beginning, we already knew.  I had a personal thrill when they flashed some Tweets on the screen in front of 3,000 people, showing the breadth of speculation as to what Pottermore was...and mine was one of them! :-)

But some new information was revealed.  And here's the gist of what I found most intriguing:


While the Pottermore presentation was indeed thrilling, perhaps what I enjoyed best about LeakyCon were the times I got to talk with other Potter frands (friends + fans) that I'd just met.  Because being a Potter fan is a bond that makes us friends as well.

And don't forget to check out PotterChat this week for great blogs on Harry Potter and loads of prizes!
Posted by S.P. Sipal at 8:48 PM