Something Potter This Way Comes!

LeakyCon was amazing! I had a great time, met many wonderful Potter fans, and have loads to tell you. But that will be a post for later today.

Right now, I have some exciting news to announce. I've joined with seven other fabulous bloggers to bring you a FULL WEEK OF POTTER FUN! Figuring that most of you can't let the magic end, we've created #PotterChat, complete with a blogfest, a scavenger hunt contest with great prizes, AND interactive twitter chats! All the information is below. 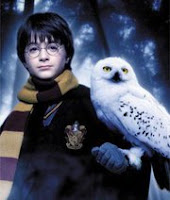 For me, this week I'm also celebrating my first year blogoversary here at HarryPotterforWriters!! So instead of just one prize in the contest, I'm offering two, because I have a lot to be thankful for! A full year of blogging about improving our magic of writing with Harry Potter as our text with other wonderful writers and fans! What could be better?

Can't let go of the excitement of seeing Deathly Hallows Part 2? On pins and needles until the opening of Pottermore and hoping you'll be one of the lucky early entries?

Then join our #PotterChat every day this week for fantastic blogging and Tweeting on all things Potter! Each day, some of our lovely and extremely interesting bloggers will bring you a new post on Potter sure to help quench your craving for that golden Harry Polyjuice. Then, at special designated times on Twitter, join us for a #PotterChat, where you can discuss live with the bloggers and other fans all things Potter -- your review of the movie, your expectations for Pottermore, whatever.

But BEST OF ALL -- is the PotterChat Scavenger Hunt. Follow the clues from one blog to another and collect the Q&A answers. When all answers have been revealed, e-mail the answers with the name of the blog they were found on to PotterChat8@gmail.com. First correct entry gets first choice of prizes, second entry gets second choice, and so on.

Jami Gold, Paranormal Author by Jami Gold on Harry Potter and Beyond: What Inspires You to Write? (8:30 a.m. Eastern)

Bekah Snow's blog by Bekah Snow on Heroes Worth the Read: Ways to Make Your Characters Jump into Readers' Hearts (7 a.m. Eastern)

Alivia Anders; Musings of a Microwaving Burrito Enthusiast by Alivia Anders on Why We Still Feel Sympathy for the Bad Guys

Paranormal Point of View by Lisa Gail Green on How To Leave 'Em Wanting More! The Wonderful World of Potter (7 a.m. Eastern)

Lyn Midnight Against the Odds, by Lyn Midnight on The Boy Who'll Live Forever... in Fan Fiction (9 a.m. Eastern)


#PotterChat:
Here's the schedule for our one-hour #PotterChats on Twitter each day. We've tried scheduling for various time zones. Simply follow the owl...I mean the hashtag!  :-)

Here are the clues that you will have to follow and find throughout the week. Once you have visited all 8 blogs and found ALL 8 clues, please e-mail your list of answers and which blog they were found on to Potterchat8 AT gmail DOT com.

Please note: You cannot submit your entry until 9 a.m. Eastern on Friday, when all 8 answers have been revealed on the blogs!


Thanks for visiting and for playing! We look forward to a wonderful week with lots of fun!
Posted by S.P. Sipal at 8:28 AM