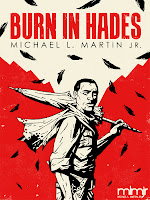 Today I am thrilled to introduce you to a debut fantasy author whose book I absolutely LOVE!  Michael L. Martin, Jr. has written a unique adult fantasy featuring a former slave and deceased convict who journeys across multiple realms from various cultures of the Underworld in search of redemption:

Cross never forgives because he never forgets.
Haunted by the Hell of his past transgressions, he sets out on an epic journey across the underworld to paradise--not to frolic in the gardens with the righteous, but to drink from the river Lethe which causes complete forgetfulness.
He's a rare soul who remembers his life before death, known throughout the underworld as "The Man Who Remembers". There's a bounty on his memories, and envious spirits hunt his head to steal them.
Erasing his mind will get the spirits off his neck and allow him to keep his crown on its throne, but he will have to continue his afterlife in an ignorant bliss. Even more unfortunate for him, paradise is guarded by a great wall that annihilates any soul that gets too close. No member of the damned has ever broken in.

Michael's vision is truly epic and his concepts amaze me.  Burn in Hades is a story that, like Rowling's, contains layers upon layers of meaning all wrapped within an entertaining story and sandwiched between intriguing characters.  I'm so excited about this book, that I could go on and on, but if you'd like to read more, check out my review on Amazon here.

Be sure to read the contest info after Michael's post as he's giving away a copy of Burn in Hades!  Now, please welcome Michael!

Congratulations Suzanne Lucero!  You're the winner of Michael's book Burn in Hades!  I hope you enjoy it as much as I did.  I'll send you an e-mail about which format.

A Sense of Wonder
Not every story needs to evoke a sense of wonder, but many of us have fallen in love with our most cherished stories because of the awe they’ve struck within our imaginations.

What is a Sense of Wonder?

Many writers and critics have their own definition.

And I have mine. When the reader side of me grows curious about a setting with a desire to explore it long after the story is over, sometimes even wishing that I could live in that world, that’s how I know I’ve been smote with the lightning bolt of awe. Also, when the writer side of me wishes I had thought of that concept first.

J.K. Rowling was a master at a sense of wonder. I’m going to share with you some tricks and treats from her bag of goodies.


How Do Writers Evoke a Sense of Wonder?

It starts with you as the writer. You must be in awe of the world you’re creating. If you don’t find your setting inspiring, readers probably won’t either.

You must be that excited tour guide that can’t wait to show the tourists what lies around the next bend. But you can’t show them everything at once. That would be overwhelming.


The Setup and Punchline

Start small and branch out. Think of your story as an inverted pyramid. 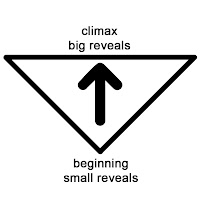 Begin at a single point (the bottom tip of the triangle) with small reveals here and there. As you move up the pyramid it gets wider. The more it branches out, the more you reveal. Little by little, peel that curtain back more and more as you progress through your story. Give readers a peek. Then reveal another curtain. The flat part of the inverted pyramid should be right around your climax. That’s when there should be no more curtain games. Everything comes out into the open either before or during the climax.

From the very beginning of the Philosopher's Stone, there are small wondrous moments. From the cat reading the newspaper to the vanishing glass and Harry speaking Parseltongue to the boa constrictor. In fact, these weren’t just setting up events in the Philosopher’s Stone. They foreshadowed even greater events in the future of the series.

Peculiar things occur just out of the readers reach, stirring their curiosity. But that’s just one technique for the setup.


(picture via The Harry Potter Companion)

Another way to approach the setup is to make the character struggle for a specific goal. This is important because we readers tend to connect with a character who strives for something attainable yet out of reach. We root for them to succeed if we like them.

And Harry has a rather difficult time getting to Hogwarts at first. It begins with the letters to no one. During these shenanigans with Uncle Vernon, the reader grows more and more curious about what lies ahead.

Caution: Prolonging a reveal can potentially backfire if stretched for too long. A reader can become disinterested with finding out what’s behind the curtain. But J.K. Rowling and other great storytellers counter this by giving the reader peeks at other interesting things along the way while doling out hints of what’s to come.

This is where we meet Hagrid for the second time. He’s familiar to us because we readers met him earlier. We’ve witnessed the giant crying like a little baby and we like him, so when Harry meets him for the first time, we already trust him and accept all the hints he drops about Hogwarts. But still, he doesn’t spoil everything.

From there it's onward to Diagon Alley (more hints) and Harry is then dropped off at Platform 9¾ (more struggle). And even after Harry gets through all that, we're still not at Hogwarts yet. We meet new friends and new enemies and discover new clues during a brief bit of travel on the Hogwarts Express.

Now on to the big stuff.


Scope and Depth of the World

Your worldbuilding comes in here. Think bigger than big is.

Not every story requires extensive world-building. You may go as far or as short a distance as you prefer. There aren’t any world-building police who will come and arrest you because you didn’t compile a family tree for background character #86.

But I’ve discovered through my own writing and from studying my favorite authors that going that extra mile, including that additional piece of detail that doesn’t seem like it matters at first, makes a world of difference between a setting that feels complete and sufficient and one that jumps off the page and feels like it exists in real life. It truly is the little things that count. They tend to make the big things seems bigger by contrast.

Again, every story doesn’t need so much world-building. Every reader won’t be interested in everything your world has to offer, but you can please some readers some of the time.  There’s also potential to get lost in the worldbuilding to the detriment of your novel. You might forget about plot and neglect to tell a great story. You may never finish the manuscript at all because you’re afraid to move on until you’ve figured out the puzzle of your world, which may never happen. Very often it never happens.

In the end, each storyteller must determine how much world-building is necessary on an individual basis.

Your character(s) should be in awe of something in your world. No, they shouldn’t be gawking at every least little thing. That would get annoying and reduce the intended effect. But there should be at least one thing that makes them go, “Wow! That’s pretty cool.” Or “that’s really weird!”

Moments that stand out as significant events to the character also stand out to the reader in the same way. Readers will wonder about what’s occurring because the character is wondering.

If the character is amazed then the reader will know that they probably should be amazed as well. That doesn’t guarantee that they will be, but if you don’t let them know when an event is significant, they might miss its significance.

This will most likely come more into play during the revision/editing stages of your manuscript when you can really focus and home in on the concrete images you want to project into the reader's mind.

Your choice of words will determine your tone and the effect on the reader.

From portkeys to gillyweed, J.K. Rowling invented a great number of concepts specifically for the Harry Potter universe, seemingly out of necessity.

I can’t speak for her or any other writer, but I can speak for me. Often, I’m forced to invent concepts because the story requires it. This keeps things fresh and unexpected for readers.

The mundane is your frenemy. Readers need to feel grounded in a world full of unfamiliar things. But you can utilize the mundane to your story’s advantage by contrasting it with the extraordinary things that populate your world.

Take something familiar and give it a new twist. But not a twist for twist's sake. It must make sense within the context of your world.

You can’t really avoid the mundane. There’s nothing new under the sun. True. Technically. But…

“Discoveries” are made every day if you look to science. New species are found deep within the ocean or in extreme climates previously thought to be uninhabitable, advancements push the envelope of technology, and new information is learned on the mysteries of our universe.

These findings expand our outlook and broaden our view of our puny lives. They may not be new on galactical time scale; they’ve always been around, but they are new to us. That’s key to understanding how to evoke a sense of wonder in your fiction.

By virtue of these here Internets everyone knows everything there is to know. Some fiction readers have seen it all and have become jaded. Wizards, elves, and dwarves can all become mundane when there’s a sense that they have been overdone.

However, new readers are born every single day. When trying to evoke a sense of wonder, the jaded readers may not be your audience. But that doesn’t mean you can’t “wow!” them with 3-dimensional characters who aren’t just props to support your plot or worldbuilding.

Bio:
Michael L. Martin Jr. is an author of fantasy who believes magic should always be magical because it's, well, magic. His tales combine fantastic monsters, magic and mystery with a dash of whimsy. His characters embark on dark journeys and fun adventures through wondrous worlds.  Burn in Hades is the first novel of his upcoming Life After Death Trilogy.


Michael, thanks so much for this fabulous post!  If you all would like to read more about Michael, you can find his blog here and his Twitter here.

For now, Michael has a book to give away!  Burn in Hades is available on Kindle, Nook, and iBooks.  If you'd like to win a copy on one of these platforms, all you need to do is comment below and ask Michael a question.  It can be about his story, his writing process, what made him choose the Underworld as his setting...whatever you can think of!

I will choose one winner by random generator Friday at noon EST and announce here!  So, fire your questions away!
Posted by S.P. Sipal at 8:21 AM