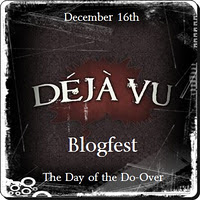 So in reading one of my favorite bloggers early this morning, (thanks Laura!), I discovered that today is Deja Vu Blogfest. What fun!

In looking back over my earlier posts from over a year ago, I decided to revisit this one, because, to be honest, it needed a touch-up.

Hope you enjoy a second, improved helping of A Taste of Magic. Oh, and please skip over to Wednesday's guest post from fabulous debut author Michael L. Martin, Jr. and post a comment on A Sense of Wonder to win a copy of his book Burn in Hades. Winner will be announced in this space at noon today EST. So hurry!

Congratulations Suzanne Lucero!  You're the winner of Michael's book Burn in Hades!  I hope you enjoy it as much as I did.  I'll send you an e-mail about which format.

A Taste of Magic
When working with an element unfamiliar to your reader, such as a certain magical spell or fantastical beast, it is important to introduce how your creation works before using it in an important situation, especially a situation that involves a twist or mystery.  You have to play fair with your reader by exposing the magical function before the magical result is critical to the story.

J.K. Rowling was really good about this.  For example, we saw McGonagall transform as an animagus long before the Padfoot, Wormtail, Prongs, and Mooney thread of Prisoner of Azkaban.  Likewise, Jo introduced the Polyjuice potion as a relatively minor plot point in Chamber of Secrets before it became a major potion of concealment two books later.

In looking at Goblet of Fire, I found two magical elements that JKR deliberately introduced to her reader at the beginning of the story which played a crucial role in its climax: the Portkey and Prior Incantato.  Early in the book, Mr. Diggory used Prior Incantato to discover the last spell cast from the wand Winky had been discovered with...Harry's own.  Hermione gasped in horror as a shadow of the Dark Mark emerged from Harry's lost wand.

When traveling to the Quidditch World Cup, Mr. Weasley tells Harry that the Portkey they are about to take is an object "used to transport wizards from one spot to another at a prearranged time.  You can do large groups at a time if you need to."  And when Harry asks what type of objects they are, he replies, "Well, they can be anything...Unobtrusive things, obviously, so Muggles don't go picking them up and playing with them." (p. 70, GoF).

Portkeys can be anything...like a TriWizard Tournament Cup! And mirroring the beginning of the book, Cedric takes hold of the Portkey along with Harry to a meeting that involves Death Eaters.  At the dark moment, however, the Portkey transports Harry and Cedric into a much more deadly encounter where Cedric loses his life and Prior Incantato unleashes "the ghost of a spell" (p. 136) that reveals Harry's deceased mother and father.

When working with new elements, magical or otherwise, that play a crucial role in the climax or mystery of your story, it's important to be sure that you have introduced your reader to them, and the way they work, beforehand.  Give your reader a taste of magic early on by introducing creations of your own imagination in such a way that your reader can be an active participant in discovering your story's secrets.  Don't just spring a crucial surprise on them that they could not have guessed.  They'll feel cheated.