One excellent way to demonstrate character in a story is to show how your hero or secondary treats other people.  Or, in the words of the immortal Sirius Black, "If you want to know what a man's like, take a good look at how he treats his inferiors, not his equals." (GoF, p. 525)  Through the course of the last three books, JKR gives the reader insight into the character of three men based on how they treat one considered an inferior, a house-elf named Kreacher. 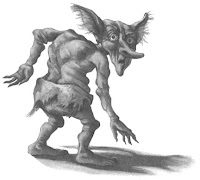 Sirius Black -- In Order of the Phoenix, Sirius hates the sight of Kreacher and treats him terribly. But it is not Kreacher himself whom Sirius hates as much as it is what Kreacher stands for. Kreacher is the last surviving remnant (aside from Sirius) of the pureblood, aristocratic, and extremely bigoted Black family. Sirius seems to hate everything about his family and what they stood for, which resulted in him running away at sixteen to go live with Harry's father, James. Sirius' mother subsequently blasted her son from the Black family tree tapestry.

Unfortunately, this very understandable feeling Sirius harbors towards his family's prejudices results in him treating one beneath him with an attitude bordering on his family's bigotry. And in the end, is what causes Kreacher to fatally betray Sirius to his Death Eater cousin Bellatrix.

Lord Voldemort -- In the "Kreacher's Tale" chapter of Deathly Hallows, Kreacher reveals to Harry, Ron, and Hermione how his master, Sirius' brother Regulus, a Death Eater, had requested that Kreacher go with Lord Voldemort on a secret mission. This mission involved Kreacher accompanying Voldemort to hide his Horcrux locket in the cavern. Voldemort wished for a house-elf to accompany him because he considered the elf's magic less important and the elf himself expendable. Voldemort forced Kreacher to drink the basin of poison and then left the elf alone to die at the hands of his zombie-like Inferi.

Regulus Black -- In this tale of three men, it is Regulus Black, Sirius' deceased brother and former Death Eater, who comes out the hero. Upon Kreacher's return to the Black family home (having escaped the Inferi due to his special powers and loyalty to Regulus), the elf tells his favored master all that occurred. Regulus has Kreacher return with him to the cave and show him the way to the Horcrux. But instead of having "the inferior" house-elf drink the potion for him, as Voldemort did, Regulus drinks it himself, condemning himself to death at the hands of the Inferi. Regulus' last request is for Kreacher to return home safely with the locket and destroy it.

Harry -- I said this was a tale of three men, but truly it all comes down to Harry. Up until the point of "Kreacher's Tale," Harry first treated the house-elf as a grotesque curiosity, and then, after Sirius' death, as an object for his blame and hatred. But when Harry realized how Kreature had been abused at Voldemort's hands and by his potion, and why the house-elf was so blindly loyal to the Black family, then Harry's heart softened, and for the first time, he treated Kreacher as someone other than a creature, but human, and deserving of his respect.

As a character, Kreacher has two important roles. To the plot, he is important for hiding and revealing this clue regarding the locket Horcrux. But I think his deeper purpose in the story is to reveal the inner character of these men, and to show the changing and maturing heart of Harry.

As writers, we have many tools available to show character development.  We can do this through their actions, their choices, the opinions of other characters, and in this example, in how our hero treats those around him, including his "inferiors."


Contrasts and comparisons.  Foils and shadows.  How powerful it is to show Harry developing beyond his hatred of Kreature to an attitude of trust and respect.  It's almost, but not quite, as powerful as Harry's 180-degree turn toward Severus Snape.


How have you portrayed the way your hero and secondaries treat others?  Have you included a "touchstone" type of character who reflects the developing arc of your heroine by the change in how she treats this individual?

Only a few days left to sign up for my new workshop: Conflicts of Myth: Using Classical Myths to Deepen Your Contemporary Novel. This is a month-long online class sponsored by SavvyAuthors that starts Tuesday. Sign-up now!  (please :-)
Posted by S.P. Sipal at 9:52 AM