Two weeks ago, I posted the first half of the character development arcs for the Final Chapter series, analyzing the secondary characters. Here, finally, is the promised second half with the major characters.

Remember that to successfully judge a character arc, we need to look at 1) where that character started, 2) what obstacles they had to overcome, 3) what changes occurred along the way, and 4) where they ended up. 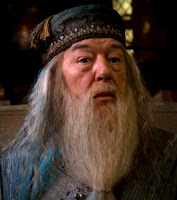 Dumbledore began the series as the wise mentor and ended as the same. However, along the way we discovered that he had stumbled in his past, rather largely. By allowing his desire for fame and power to overshadow his responsibility to his family, he caused the death of his sister and the loss of respect of his sole-surviving relative. But it wasn't just this snippet of backstory which JKR used to round Dumbledore out. Throughout the story we saw him holding back from trusting others, playing his cards too close to his chest, and in the end, manipulating those around him.

In a way, Dumbledore's arc was more descending than ascending, at least as it took shape in the reader's mind. However, because Dumbledore had acknowledged his sins and tried to prepare Harry to do better, all the while choosing a position of guidance at Hogwarts rather than of power at the Ministry, he is restored to his chair of benign mentorship by series' end.

Dumbledore's Shining Moment -- foreshadows Harry's a book later. When Dumbledore lays down his life so that Harry may carry on, he shows that he is devoted to the true greater good and can, hopefully, make amends for the life he once lost by the many he is acting to save.

Snape is such a complex figure that he deserves his own book. It's on my list of things to do! :0 But for now, to put Snape's character arc as simply as possible…

Snape, like Dumbledore, I believe changed more in the reader's mind than he did in his own. He remained true to himself by remaining loyal to Dumbledore and his lost love. As the stakes and danger increased for him, and Dumbledore pushed him to greater acts of spying and risk, Snape met these challenges bravely, even if irritably, to protect the son of the man he loathed and thereby preserve the memory of the woman he loved.

Ironically, Snape's Shining Moment came when he killed Dumbledore. For to honor Dumbledore's wishes and protect Harry's (and Draco's) life, Snape risked the damage his own soul that this horrific act would bring.

One could argue that as the embodiment of pure evil, Voldemort had no character growth. What JKR did instead with this antagonist is to let us see glimpses into his past that shaped him into the demon he became. Playing on her main themes of love and choice, Voldemort was born and raised without love and then, on his own, made the wrong choices.

Even when given the opportunity for his own Shining Moment at the end by Harry, he could not bring himself to either understand or grab it. For to a man who has never known love or given love, there is no way for him to grasp any empathy for those lives he has torn apart. And empathy is a necessary component of remorse.

When we meet Ron he is a poor, somewhat neglected younger brother, living in his older brothers' shadows...which eventually becomes Harry's. By series' end, he has battled with jealousy and his own fears of being loved less to become a passionate and staunch defender of all those he loves. In the Battle of Hogwarts, he is able to throw off Voldemort's silencing charm before anyone else to defy the Dark Lord.

Ron's Shining Moment -- came with his defeat of his own personal Horcrux. The Slytherin locket had held such power over him because Voldemort had played on Ron's deepest fears and insecurities. By returning to those he'd abandoned and stabbing the locket, Ron conquered his dark side and became a stronger man and a more loyal friend.

In the beginning, Hermione was portrayed almost the exact opposite of Ron. She was the know-it-all witch who no one liked. But her fears concealed her inner insecurities of being in an unfamiliar world and her ability to make friends. Along the way, Hermione learned to break a few rules, stand up for herself, stand up for others, and remain strong, even when once again betrayed by the one she'd come to love.

Hermione's Shining Moments are so many that choosing one is hard to do. But I'd vote for her getting the Trio out safely from the Lovegood home as the Death Eaters approached. It was her quick mind that not only saved herself, Ron, and Harry from capture, but also showed them long enough to the Death Eaters so that Xenophilius would not be blamed and harmed.

As the hero of the story, Harry, of course, has the most time spent on his character growth. Through making both right choices (Sorting Hat) and mistakes he learned from (Sectumsempra) along the way, Harry overcame every obstacle thrown at him, not only by Voldemort and his band of Death Eaters, but by Harry's own weaknesses. By learning to trust in others and to not seek power for its own sake, Harry has developed himself into a young man capable of willingly and deliberately giving his life so that others may live.

This Shining Moment of Harry's when he gives his life in the dark forest, enables his resurrection in the Great Hall as the man who could strip the power away from Voldemort without damaging his own soul.


While writing in an exotic, fantastic world does give JKR a certain edge in creating eccentric, memorable characters, her basic skills are still ones we can apply to our own writing, no matter the genre. Draw your characters, even your secondaries, in engaging, intriguing, yet realistic detail. Get at their hearts to understand what they are good at...and as with the boggart in the cupboard, what they most fear.

Give each character a goal and a reason to be motivated toward this goal. Make each one face a stumbling block, a hardship or conflict they have to fight against toward attaining this goal. Make your characters conquer real challenges before achieving their triumphs. And through all this, show your characters' choices and development with action, not just with narrative words.

What shining moment have you recently used in finalizing a character arc for one of your characters?
Posted by S.P. Sipal at 9:00 AM