Mad-Eye and Frankenstein: A Monstrous Introduction!

Mad-Eye Moody is one of JKR's most fascinating characters, even in GoF when he is basically an impostor. The reader first hears about Mad-Eye a chapter before he is brought onstage, through the varied opinions of other characters. Using the positive and negative (and sometimes false) opinions of others is a great way to lay the foundation and reputation of a new character.

"Mad-Eye Moody?" said George thoughtfully, spreading marmalade on his toast. "Isn't he that nutter -"
"Your father thinks very highly of Mad-Eye Moody," said Mrs. Weasley sternly.
"Yeah, well, Dad collects plugs, doesn't he?" said Fred quietly as Mrs. Weasley left the room. "Birds of a feather. . ."
"Moody was a great wizard in his time," said Bill.
"He's an old friend of Dumbledore's, isn't he?" said Charlie.
"Dumbledore's not what you'd call normal, though, is he?" said Fred. "I mean, I know he's a genius and everything.. ."
"Who is Mad-Eye?" asked Harry.
"He's retired, used to work at the Ministry," said Charlie. "I met him once when Dad took me into work with him. He was an Auror - one of the best. . . a Dark wizard catcher," he added, seeing Harry's blank look "Half the cells in Azkaban are full because of him. He made himself loads of enemies, though. . . the families of people he caught, mainly. . . and I heard he's been getting really paranoid in his old age. Doesn't trust anyone anymore. Sees Dark wizards everywhere."

Notice how JKR uses motherly corrections from Mrs. Weasley to highlight George's comment that Mad-Eye is a nutcase. Through this preliminary work, JKR lays the base for Dumbledore's trust of Mad-Eye and an excuse for Mad-Eye's extreme paranoia that will be shown throughout the book.  Still, she uses Fred and George -- who in their role of tricksters have the remarkable ability to view their world outside the status quo -- to question whether Mad-Eye is truly all right and to plant a thread of suspicion upon him.


A man stood in the doorway, leaning upon a long staff, shrouded in a black traveling cloak. Every head in the Great Hall swiveled toward the stranger, suddenly brightly illuminated by a fork of lightning that flashed across the ceiling. He lowered his hood, shook out a long mane of grizzled, dark gray hair, then began to walk up toward the teachers’ table.
A dull clunk echoed through the Hall on his every other step. He reached the end of the top table, turned right, and limped heavily toward Dumbledore. Another flash of lightning crossed the ceiling. Hermione gasped.
The lightning had thrown the man’s face into sharp relief, and it was a face unlike any Harry had ever seen. It looked as though it had been carved out of weathered wood by someone who had only the vaguest idea of what human faces are supposed to look like, and was none too skilled with a chisel. Every inch of skin seemed to be scarred. The mouth looked like a diagonal gash, and a large chunk of the nose was missing. But it was the man’s eyes that made him frightening.
One of them was small, dark, and beady. The other was large, round as a coin, and a vivid, electric blue. The blue eye was moving ceaselessly, without blinking, and was rolling up, down, and from side to side, quite independently of the normal eye - and then it rolled right over, pointing into the back of the man’s head, so that all they could see was whiteness.
The stranger reached Dumbledore. He stretched out a hand that was as badly scarred as his face, and Dumbledore shook it, muttering words Harry couldn’t hear. He seemed to be making some inquiry of the stranger, who shook his head unsmilingly and replied in an undertone. Dumbledore nodded and gestured the man to the empty seat on his right-hand side.
The stranger sat down, shook his mane of dark gray hair out of his face, pulled a plate of sausages toward him, raised it to what was left of his nose, and sniffed it. He then took a small knife out of his pocket, speared a sausage on the end of it, and began to eat. His normal eye was fixed upon the sausages, but the blue eye was still darting restlessly around in its socket, taking in the Hall and the students.

All in all, a great introduction of an awesome character.  But where to begin to analyze this?  JKR just throws out so many well-crafted details, many of which point to clues to Pseudo Mad-Eye's ultimate purpose in this story. 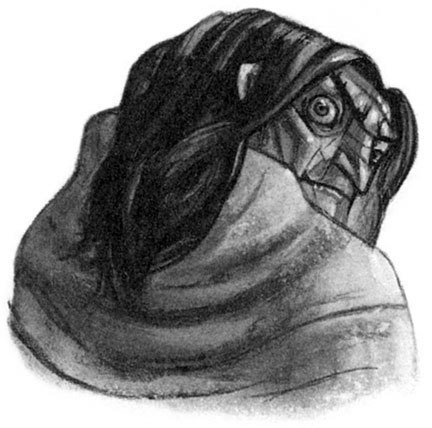 1) Words like "shrouded," "limped," "speared," "unsmiling," "undertone," and "darting" cloak Mad-Eye as a man of mystery, action, and distrust.

2) This lack of his trust of others is reiterated with actions such as his eye rolling all around, into the back of his head to study everyone and everything around him, sniffing his sausages, his unblinking, always wary eye, and even the dull echo of his clunking gait across the floor, which hints at his tremendous losses, both physical and emotional.

3) Notice the wonderful, vivid descriptions such as "carved out of weathered wood" -- not just any wood.  That weathered helps the reader know, this man has been through a lot.  That "long mane of grizzled, dark hair," also lends to his crusty personality.  Add to that the diagonal gash for a mouth and the nose minus a few chunks and you've got yourself a fabulous description that portrays a man who, using one of my father's expressions, has been "run hard and put up wet!"

With the extreme care which JKR has used to introduce this character, the reader should know that this man is important to this story.  Put all these parts together and you've got a most unusual man, a man who's seen the dark side of life, faced physical harm, distrusts must everyone around him, but a man whom Dumbledore trusts and welcomes brightly.

Notice, however, that JKR does give a couple of hints toward this character's ultimate end -- that "fork of lightning" above his head is no accident.  To fork is to divide into two or more branches.  Pseudo Mad-Eye as impersonated by Barty Crouch is definitely a divided man.  Perhaps a stronger hint are the "eyes that made him frightening."  If eyes are the mirrors of the soul, then this man's "small, dark, and beady" and unblinking should strike fear into the heart of the reader!

But perhaps the greatest clue of all is the subtle hint of a literary metaphor at work here.  Do you get the feeling that Mary Shelley might have had an influence in the creation of this Frakensteinesque Auror?  What with the flashes of lightening, the hints of an inept creator, and the scars and mismatched eyes that make it appear as if Mad-Eye was put together from various other people (as indeed Pseudo Mad-Eye was!).  Shelley's monster was abandoned by his father-creator, turning him into a murdering, lost son -- much as Barty Crouch Jr. was.  Indeed, at the end of Shelley's work, when the monster Frankenstein created and abandoned, nameless, tells his tale of woe, one feels more sympathy for him than for his creator -- as I felt myself for Crouch Jr. as well.

Combine the forked lightning and shifty eyes with the hints of a Frankenstein created monster and Geroge and Fred's earlier banter that hints at distrust, and the reader should definitely be looking beneath this stranger's shrouded cloak into his mysteries.  With these subtle clues, reader you have been warned.  "CONSTANT VIGILANCE!"  Even for the man who will soon teach Harry this crucial lesson in class.

As writers, we introduce characters to our readers all the time.  Many require straightforward weaving of description with action that bring that character to life.  But a few will challenge us to use our highest skill.  Those characters that must fool our reader for a time period, we must pay particular attention to.  While it is ok to play sly and fool your reader, you don't want to outright deceive them unfairly.  Clues, as subtle as possible, must be present, even from a character's first introduction.  Through the use of a subtle literary metaphor, opinions of others, and shifty eyes, JKR gave a hint to the alert reader that all was not what it seemed with Mad-Eye, while at the same time presenting him as a man whom Dumbledore trusted, a wounded her, and an altogether fascinating creation.

I'm curious to know -- what did you all think of Mad-Eye when you first met him?  Were you alerted?  Were you fooled?  At what point had you figured out he was the prime antagonist?

You may also be interested in my post about the link between Mad-Eye's magical eye and the Eye of Horus.