The Snake and the Wand -- Are They Related?

Can you think of a more cliched article of fantasy writing than the wand?  What witch, warlock, mage, or sorcerer would not be properly attired without the final touch of this powerful weapon, whether it be a traditional stick of wood or a staff of power...or perhaps even a light saber.

I've been fascinated recently with the wand and its origins. While some people believe the origins of the wand lie in a symbolic representation of masculine power, a phallic symbol, I've been pondering another source. This is the result of the major edits I just finished with Southern Fried Wiccan, which is releasing in March. One of the things I had to work on to get just right was my description of an ancient goddess who gets some screen time on the page (in her mini-sculpture form).

The Snake Goddess of Crete (from ~1600 BCE) is an awesome example of the power of the goddess in antiquity. Not only is she holding two snakes, but she holds them upright, in a display of power, with her breasts -- her female reproductive and nurturing power -- fully bare. She is not a goddess to mess with.

But it is the way she holds the snakes that got me thinking about other early examples of snakes used as rods of power and their origin.

Look at this example of a couple of royal serpents on a staff carried by Thoth, the ancient Egyptian god of knowledge and writing (yes!). 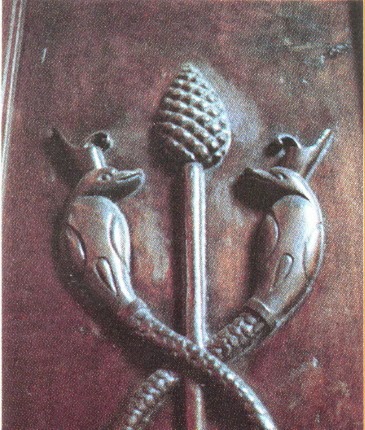 Or this one of a pine cone staff associated with the Egyptian god, Osiris, god of the dead. 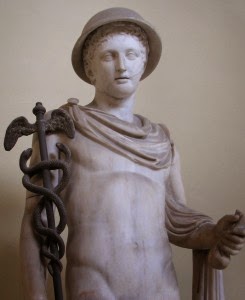 There were many examples of snakes wrapped around sticks from ancient Babylonia and Egypt which eventually made their way into the representation of the caduceus of Hermes.

Many of these symbols were not only associated with power, but with medicine and healing as well Handling snakes has long been a dangerous, but in many areas of the world, a necessary occupation. The snake handlers of India are still called upon in rural villages to remove venomous vipers from people's home. Even today in Appalachia, the tradition of snake handling is still practiced in some churches. Those who fear the snake (me!) look with awe on anyone who is fearless enough to engage them with their bare hands.

We know that snake worship was practiced in many ancient societies, and most believe it was due to the snake's symbolic nature of death and renewal through the shedding of its skin, plus it's representation with the underworld as it lives underground. But from a real practical viewpoint, I wonder -- did the wand originate from snake handling? Is that why so many of the earliest depictions of wands and royal staffs frequently incorporate a serpent image as well?  Perhaps people, even in ancient times, who wanted to adopt the power of the snake charmer without...you know...actually touching a snake, picked up a stick and magically assumed its power.