I admit it.  I'm one of those writers who gets so caught up in her research that I can just live there.  I LOVE learning about the secrets of the old mystery cults or how people transitioned from hunter-gatherer to agrarian at Catal Huyuk (Çatal Höyük).  And when writing, my OCD comes out to the point that I must know exactly the titles Artemis of Ephesus would have been called by in 52 BCE and how sound-proof the earthen walls were in the subterranean cities of Cappodocia.  (All of which give you hints to my current WIPs).

So I spend way too much time researching, but I love it.  In fact, that's part of the reason as to why I write in the genres that I do, because I'm naturally drawn to these questions and subjects.  I want to know and experience how people lived before, perhaps because it helps me understand who we are in our central core.

I thought it might be fun to share with you some of my favorite resources.  Some of these may seem a bit wacky, and others hard to find, but they all have something unusual going for them.

Joseph Campbell - If you're a writer, you know The Man.  I'm sure you've read, or at least looked at, The Hero With a Thousand Faces.  But have you looked beyond this fabulous book to his multitude of other works on myths from various cultures and centuries?  If you want to really dig down deep and understand what these old stories were all about, the conflicts of the heroes and heroines that we still struggle with today, and why universal archetypes speak to us so deeply, then you must check out his other work as well.

Manly P. Hall - This one takes a dip into what some might consider a bit wacky, but also fascinating.  To be very honest, Hall is very much inline, in my POV, with Campbell, but wrote before him, and perhaps was one of his influences.  However, while Hall was recognized in his day for his achievements, he never attained the kind of fame Campbell did, perhaps because he focused more on the mystical and occult.  His greatest work, The Secret Teachings of all Ages, originally printed in 1928, is absolutely breathtaking in its speculation, insight, and comprehensiveness, but NOT a light read.  Fortunately, they now have it in a smaller format than the monstrous (and expensive) edition I bought years ago! 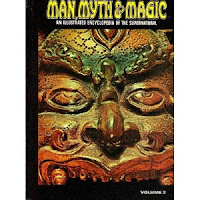 Man, Myth, & Magic - This is a series of encyclopedias edited by Richard Cavendish and published in the 1970s.   (Remember those pre-Wiki days, when physical encyclopedias of various topics were actually published?)  I stumbled across volume one at a local used bookstore one day and was so captivated that I sought out and bought a complete set on e-bay.  I love being able to flip through the pages and see various pictures and topics on bits of myth and esoterica that I would never think to look up.  This frequently sparks fresh ideas for whole new stories as well as bits of details for one I'm already working on.  And yes, it also inspired the title for my blog title 2.0. :-)


TourEgypt.com - If you've read this blog for any length of time, you know my fascination with Egyptian myths and how Rowling incorporated them into her stories.  One of my favorite online sources for researching these myths may seem a bit unusual.  TourEgypt seems to be a commercial tour site, but the depth of their articles are really phenomenal.  Any time I would google a specific detail that I was trying to hunt down, this site regularly popped up, until I started hunting there first.  I've linked you to one of their examples on the Coffin Texts, which I used in researching one of my early-days Mugglenet articles.

Crystalinks.com- Finally, another online resource that, like the one above, kept showing up so much whenever I'd google something, that I started using them as a main resource.  CrystalLinks seems to be a New Age type of site, so I will usually use whatever material I find there as a starting point and then research it further.  I have nothing against New Age, but their focus can sometimes be on how the pagan religions are re-envisioned today, and if I'm researching a story that needs to know how that myths was understood in antiquity, then I must probe further.

I'm sure I'll think of another fabulous resource as soon as I post this, but then, I can always update it as I go.

Would love to know if you've used any of the resources I've mentioned above.  Also, what are some of your favorites?

Also, don't forget that I'm presenting an abbreviated version of my Writer's Guide to Harry Potter workshop this week at SavvyAuthors.  Along with that, I'll be giving away a free critique of the first three chapters to one of the Savvy Authors Summer Symposium participants!  You can learn more about my editing background here.
Posted by S.P. Sipal at 10:10 AM