Was the Pensieve Foul or Fair? One Method for How JK Rowling Revealed Backstory

This post is a little different than my normal. In exploring this craft technique that JK Rowling used, instead of hitting on how it worked and why, I'd instead like to question whether it was her best choice, or if she could have chosen a more powerful technique for the same purpose. 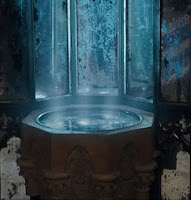 And it all has to do with one of the aspects of writing that we struggle with the most: backstory.

Memories play a key role in the revelation and withholding of information throughout the Harry Potter series. We have memories that are clear, and some that are fogged, memories that are shared, and some withheld, a memory that has been tampered with, and one sucked out of the holder’s body (along with his soul) through a Dementor’s kiss. Through it all, the reader learns new backstory that is relevant to the unfolding mystery...and is teased with what is yet to come -- until the final, and most potent, memory is revealed in Snape's dying breath.

In the course of Half-Blood Prince, Dumbledore opens eight crystal bottles of memory (counting Slughorn’s twice). As the thoughtful, wise man he is, Dumbledore proceeds methodically and logically to reveal memories of Tom Riddle to Harry, and thus to the reader. He starts at the beginning, the circumstances behind Riddle’s birth, proceeds through his young years, and finishes with the adult Voldemort returning to Hogwarts to request a teaching position.

**These dates supplied from the Harry Potter Lexicon's timeline

All these prior memories build on each other, helping Harry and the reader to understand who Voldemort is and why he became the darkest wizard of his time.  These memories also present the necessary clues about Voldemort’s Horcruxes to propel the action forward. We are therefore prepared, with the revelation of Slughorn’s memory, to understand and accept that Voldemort has killed time and time again in order to create immortality for himself and that for Harry to defeat him, he will have to seek out and destroy every last Horcrux.

However, even with the final bottle opened, the correct Slughorn memory, certain crucial questions remain:


Dumbledore begins to reveal key elements of these final questions to Harry, but dies before all is divulged. He can no longer share memories to aid in Harry’s quest... or can he?

One of the key mysteries that remained of the series going into the final book was the question of Snape's loyalty.  Dumbledore had taunted Harry and the reader with the knowledge that he held proof of Snape's allegiance, but had never revealed the details.

“Professor…how can you be sure Snape’s on our side?”
Dumbledore did not speak for a moment; he looked as though he was trying to make up his mind about something. At last he said, “I am sure. I trust Severus Snape completely.”


At this moment, this pause in the exchange between Harry and Dumbledore, it seems that Dumbledore seriously pondered whether the timing was right to truly answer Harry’s question, perhaps whether to uncork a final memory. A memory that would finally reveal the truth about where Snape’s loyalties lie.
Snape’s loyalty had been the million Galleon question that had kept fans speculating since the release of HBP--well, actually since the very beginning. Why did Dumbledore trust Snape, and was he correct in doing so?

Unfortunately for Harry, this final memory resided in a living body (at this point in time).  And Dumbledore, through his own loyalty to Snape, would not break that bond and reveal Snape's truths.

No, JK Rowling saves this final memory to come out in Deathly Hallows at a most touching point in the story...as Snape lays dying, having given his all to save the son of his lost love and fulfilling his pledge to Dumbledore to share this final memory when it would do the most good.

As writers, we discuss a lot about how to carefully reveal backstory during the course of our story.  Lisa Gail Green had an excellent post about it up earlier this week.  Backstory should be doled out carefully, in small pieces throughout a story, woven into the current action of that story as best as possible, and not in lumps that will slow down its forward pace.

Wherever backstory is discussed, there are usually warnings to not show it through flashbacks, dreams, or long, boring narratives.

While JK Rowling definitely aces the holding off on backstory until the reader is dying to know and not doling it out in a boring narrative, she does violate the dictate to not use flashbacks or dreams.  The Pensieve, as creative as it is, is still a flashback technique.  And we've seen her use of dream sequences in other places to show information that cannot be obtained through Harry's direct POV.

So, as a writer and a reader, what do you think?  Was JK Rowling's use of the Pensieve and Snape's wisp of memory a creative and powerful method for imparting the backstory she needed at that point in the story to propel the forward action?  Or were they merely flashy creative flashback tools that slowed the action?  Could she have used a better technique?


It seems to me that the one memory reader's adore was Snape's final.  Would his memory have been as powerful if we hadn't seen the sharing of memory technique earlier with less touching memories?

I'd love to know what you think!  Share your ideas in the comments below!