Twisting and Deepening the Final Battle

The final plot for the ultimate book of the Potter series was a closely guarded secret. How would this beloved epic end? Millions of readers' fervent expectations, and the financial well-being of the vast Potter empire, all rested on JK Rowling's nimble fingers.

For readers, they were concerned that their beloved friends survive the impending war and that the proper soul-mates hook up together. Many were also hopeful that their pet theories--of who was to die and who was to survive and who was loyal to whom--come to fruition.

For writers, who are more knowledgeably trained in the craft, we knew certain beats of storytelling must be met. What most fascinated us was on speculating HOW Jo would interpret this particular hero's journey.

Evil must be defeated. Harry must triumph, even if he died in the process. And order must be restored. JKR had not dutifully followed the hero's journey to end it short of the ultimate elixir.

The biggest question, for me at least, was how could this amazing mistress-of-surprise delight her readers one final time when expectations and speculations had risen so high? Was it possible that she could pull off one final twist? A twist, that of course, must have been well-laid throughout the vastly scoured pages of these most beloved tomes.

In this final chapter analysis, what I hope to cover are 1) the surprising plotting tricks JKR still had up her magical sleeves, and 2) her unique interpretation of the hero's journey. We'll cover plot twists in this post, but to keep the length sane, the hero's journey will follow another day.

With JKR, a plot twist is never just a craft technique alone. It must carry a deeper meaning to the whole series.  Therefore, this plot analysis is closely linked to the one I did a couple of days ago on themes in the final battle.

First up, that master of disguise, Snape:

JKR's ultimate plot twist, of course, was Snape. And while many of you will say that you knew Snape was loyal from Book 1, many readers had serious doubts up until the final shared memory. I can clearly remember discussing with a relative of mine, after finishing Half-Blood Prince together in July 2005, whether Snape was good or evil. My relative is extremely intelligent, well read, and a prolific writer. And he was convinced Snape was guilty. I was sure he wasn't.

We discussed the evidence. In the end, my kin had doubts about Snape's guilt, just as he'd introduced the faintest niggle in my mind as to where Snape's loyalty lay.

That's how well planted a trail of clues and red herrings JKR left for her readers. The evidence pointed in both directions, but only one side would emerge victorious.

Snape's act of mentor mercy killing, his role as double agent, was pivotal in bringing about Voldemort's demise. It was his reason for doing it, however, that had left most Snape supporters divided. Many were on the Snape/Lily ship well before the last book's release. Others believed Snape to be acting with goals of his own personal power. This last surprise of motivation was carefully concealed until the final book to keep the readers guessing and intrigued.

On that, JKR succeeded brilliantly.

The complete story of how JKR wrought the mystery of Snape is fit for a book, not a (relatively short) blog post. However, I will say that although Snape had exited the scene before the very final chapter, his actions still affected Harry's ultimate outcome. It was Snape's loyalty to Dumbledore, which Harry threw in Voldemort's face, that most unsettled the Dark Lord. Because it was in learning that Snape had not conquered Dumbledore, as Voldemort had believed, that left Voldemort holding a useless wand. Without Snape's actions, Harry would not have been triumphant.

And without Snape, JKR could not have shown off the depth and complexity of two of her crucial themes -- the power of love and the importance of choice. Because Snape had loved, he was able to make a better choice than Voldemort, who knew not love. Even to have loved once and lost is better than to not have loved at all.  For love is that ultimate elixir that protects the soul from ultimate destruction...always. 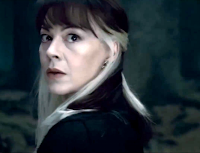 For me, the surprise twist that caught me the most off guard was the role of the Malfoys, especially Narcissa, in the final battle. Who would ever have thought that the mother of Harrry's school nemesis and the wife of the Dark Lord's second lieutenant would be Harry's final savior? That one, JKR completely snuck by me.

And yet, she prepared the reader well for Narcissa's surprisingly soft hands absorbing Harry's very alive heartbeat as she touched his chest to verify his death for Voldemort. Yet, it was her Dark Lord Narcissa betrayed, not Harry. And the betrayal was due to her mother's love, a theme JKR had developed from the very beginning, not only through Lily's sacrifice, but the love of mothers such as Molly Weasley and Alice Longbottom. Even Petunia loved Dudley dearly, though her short-sighted love sometimes caused more harm than good. And we must not forget those loving packages from home that Draco's owls constantly brought him. Indeed, the crucial criteria separating Narcissa from her deranged sister Bellatrix is that Narcissa bore a mother's love.


Harry, a simple hero with a standard spell:

The final, greatest mystery yet to be unveiled was in what manner would Harry defeat Voldemort. Defeat him, we knew he must. But how?

For an author who had based so much on her theme of love and the maiming of one's soul through killing, how would Harry kill and yet perfect his hero's journey at the same time? Surely, love would play a part. But how could love truly bring down a tyrant?

Of course, there could be a magical explanation for whatever devise she used, but with a writer of JKR's caliber, every magical and fantastical element in her created world must have a realistic counterpart in our everyday one.

In other words, to uncover the true ticking of JKR's final plot, we must understand what all that wand lore symbolizes in our real world.

In the end it must be noted that of all the Horcruxes destroyed, Harry killed only one. Harry had learned to join forces with others, to trust in the wisdom of his mentors, to lay down his life to save many, and to always seek to disarm rather than to harm.

All these lessons are just as real in our world as in Harry's.

And so, what of that ultimate fantasy weapon, the wand? How could a hero in ours truly stop a tyrant by disarming his wand? In our world, we do not have wands. But we have power. And we have tyrants who wield their power over others like Voldemort does with his wand.

When a ruler uses his power to harm his people, it can be stripped away if those oppressed rise in unified protest. Tunisia and Egypt are two recent examples. People rose up. People fought. Yes, people were killed, but the dictators' wands were ultimately disarmed.

As writers, I believe that we must plot the significance of our climax as carefully as we plot the actions which lead up to it. It's not only important to tie up most loose ends and to deliver that final, stunning twist. It's also crucial that the story have import.

Through leaving revelations of character motivation and action to the final chapter, coupled with a well-prepared trail of clues, JKR satisfied her reader with final surprises. Above all, JKR twisted every significant action and surprise with even deeper meaning into the themes of life she explored.  Because she wove her story throughout with meaningful subtext relevant in today's world, she ensured her readers would not soon forget Harry.

Above all, your reader will remember your characters' final triumph. If it's weak, or not well grounded in reality, your story will soon be forgotten. But if you plot your story well, both the above ground action and below the surface meaning, then you should leave your reader with the thrill of a satisfying read that warms their heart and is not soon forgotten. And that they then tell their friends about.

What plot twists have you saved for the ending of your manuscript?  How is that particular surprise relevant to your story's main themes?


(Update: I'm away from home using a slower computer and am noticing that sometimes the comments below don't load. There IS a comment trail. If you are not seeing it, try reloading. Your connection may be too slow).
Posted by S.P. Sipal at 12:10 PM