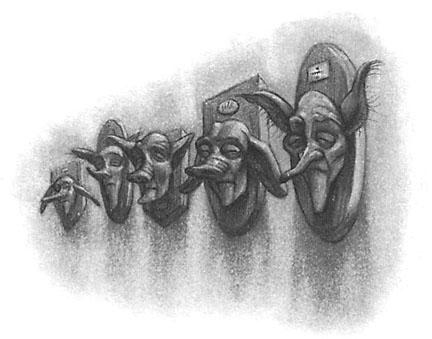 Who could ever forget the line of house-elf heads adorning the walls of Grimmauld Place?  Cut off and mounted on plaques when they could no longer carry a tea tray, these beheaded elves who served the Black family faithfully provide a visceral introduction to Sirius Black's home and family.  Readers will not easily forget this strong image nor the portrait of the screaming woman who insults everyone she considers beneath her.  Sirius' mother, and the long line of Blacks who came before her, have been effectively hooked as people who treat those who serve them as animals fit only to end life as a wall trophy.  And it's all economically done with a couple of phrases.

JK Rowling works with a huge cast of characters.  Even in the first book, the shortest, the reader encounters at least 50 individuals (including ghost, animals, and pictures) to meet and enjoy.  And yet, despite this large cast, readers find each one interesting and memorable.

How did JKR introduce these delightful characters without having turned Sorcerer's/Philosopher's Stone into the length of the later books?

One method is by giving each character a hook.  Hooks serve various purposes, but one is to provide a useful tool to help a reader remember your people when first getting acquainted before character development takes over.

A hook can be a physical description (Hagrid is a giant of a man), a manner of speaking (Quirrel's stutter), a quirk of personality (Snape's obvious hatred of Harry), a role in the story (Dumbledore as the wise, old, mentor), or, as in the mounted elf heads above, a visual result of an entire family's bigotry.

In fact the list of ways to provide a hook is as diverse as the characters themselves.  But what is crucial is that the hook help to develop that individual as well as cement them in the readers' minds to be better remembered when next introduced.

Here's a list of more characters and their hooks:

Neville is an interesting case because he is essentially given three hooks.  Not only is he awkward and clutzy, the uncool kid of the bunch, but he has a strong memory problem.  And to highlight both aspects, JKR gives the reader the active image of Neville's continuously lost frog.  As is usual, the more important the character, the stronger the hooks.

This list above is only a beginning.  And while JKR does have considerable freedom with her types of hooks due to the nature of her fantasy world, we can all tax our own worlds to the extreme when creating our characters and giving our reader something onto which to latch their memories.

What other characters and hooks can you think of from the series?  What hooks have you used in your own work?
Posted by S.P. Sipal at 12:16 PM