Driving a Stake Through the Heart of Your Characters

Stakes.  As the only thing that will kill the living dead, it's the bane of vampires and sometimes zombies.  Apparently, it also stabs fear into the heart of the writer trying to breathe life into their characters. 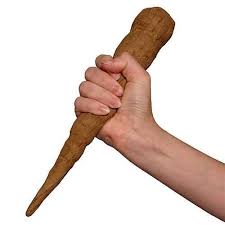 Strong character hearts require strong emotions, and strong emotions result from high stakes. You want your emotions to hit the highest pitch possible. You must have the reader experience fully the passions of your characters, whether those emotions be love or hate, trust or betrayal, laughter or sorrow. Escalate your reader's experience by raising the bar for what's at risk.

We can't all write a story about a poor, unloved, defenseless orphan who must save the entire wizarding world, indeed the Muggle world as well, from the darkest and most powerful wizard who ever lived. Not all stories can be set in this frame of stake-hood.

However, whether writing a cozy mystery, a witty women's fiction, or an emotionally charged thriller, your stakes need to be as high as is appropriately possible. Brainstorm--what is the worst thing that could happen to your hero or heroine, and then make it your plot. The higher the risk, the more rewarding that character's triumph will be.

One aspect of high stakes I feel is extremely important is that not just the hero or heroine benefit from their resulting success. The good of a community, no matter how large or small, must also be at risk. It's the carrying the elixir back to the tribe of the "hero's journey." Triumph over the antagonist is so much richer when there's a community of people who benefit from it.

With Harry Potter, we have the large end of the spectrum when it comes to a community benefit. Wizards and Muggles alike will enjoy a more peaceful world when Voldemort is no more. However, even a story that is focused tightly on the burgeoning romance between two people can include the return of the elixir. A family can be reunited, a neighborhood can be returned to order, or as in Two Weeks Notice, a community center protected and restored. The possibilities are as endless as your imagination.

High stakes should also show your characters not only at their best, but also at their worst. Many readers had trouble with Harry in Order of the Phoenix. This was Harry's fifth year of school, and at age fifteen, he was every bit the angry, angsty, antagonistic teenager that no one but his own equally angsty friends wants to be around. I got tired of Harry's tantrums in that book as well.

But it was real. After all, here was a teenager who had a lot of weight on his shoulders, so much that Dumbledore did not make him a prefect because he thought Harry had quite enough to be carrying on with.

Note that when writing a series, as in HP, the stakes must increase with each subsequent book. The hero's task cannot get easier, or there'll be no satisfaction for the reader. Harry goes from maintaining his own against a mere parasite at the end of Philosopher's/Sorcerer's Stone, to saving an innocent man from death or de-souling in PoA, to leading the capture of a pack of Death Eaters in Order of the Phoenix, to facing the ultimate showdown and making the ultimate sacrifice in Deathly Hallows.

Harry has been tested and tried since the very beginning. He has been pushed into developing skills, such as producing a Patronus that other witches and wizards his age would never consider. He must be pushed in this manner because he has an enormous task ahead of him.

No one will believe that a seventeen-year-old wizard could defeat the darkest wizard in 100 years, unless he'd been properly prepared and thoroughly tested. And no one will believe your heroine deserves her triumphant ending unless she's proved to herself, along with the reader, that she can survive and triumph over any obstacle her mean-hearted author has thrown at her.

Your protagonist doesn't have to “save the world.” For writers, stakes are emotional, not physical. What your protagonist does have to do, however, is face his or her worst possible fears, probe their deepest inner wound, pass through the fires of refining conflict, and emerge a better, stronger person on the other side.

Have no mercy! Raise your stakes to bring out the full emotional depth your hero must face and rise above. Torture and torment your characters to make them prove their worth.