Could JK Rowling be writing another Harry Potter story?

I was initially very dubious of any claims that JKR would revisit Harry's world.  She seemed rather firm at the end of Deathly Hallows that she would not return.  That's what the whole Epilogue was about:  Here's the whole clan 19 years later because this story is final.  Done. 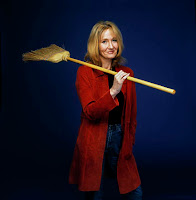 Over a couple of weeks ago, when JKR's interview with Oprah aired, the Internet buzzed with the possibility that she would do another Harry Potter book.  All the hoopla was based on the following response to Oprah's prompt, "But you know what happens ever after":

Yeah, I do.  I couldn't stop...They're all in my head still...I could definitely write an eighth, ninth, tenth.  I could easily...I'm not going to say I won't...I feel I am done, but you never know.

I listened to this, though, and thought that it was nothing different than what she'd said before.  She wouldn't discount future HP books because she didn't want to limit her possibilities, but she wasn't planning on writing another one either.

However, after today's broadcast from the Hans Christian Andersen Award, I'm having second thoughts.  In her speech before the audience in Odense, Denmark, JKR said:

I love my own characters so much that leaving them all behind after seventeen years was a kind of bereavement.  The fact that so many people enjoyed the world that I made stuns me every day.  And yet miraculously, it still feels like my own private kingdom where I can't help strolling occasionally just to see what my surviving characters are up to.


Question: Is "strolling occasionally" a JKR euphemism for "writing a new story"?

When you put today's remarks together with what she said just a couple of short weeks ago on Oprah, and this coming from a writer who is a master at subtext and leading her reader's on a trail-of-clues mystery, you have a strong hint that something Harry Potter related might truly be in the works!

Honestly, I don't think she's busy writing another HP story at the moment.  I think she's busy at work on that political fairy-tale for children...whatever that may be.  But I would not be at all surprised to find out that she's writing snippets here and there as ideas occur to her and collecting plot notes and character sketches.

Would she write about Albus Severus, Harry's middle son, who she admitted in an interview intrigued her?  Or maybe Teddy Lupin, who was a metamorphagus like his mother Tonks.  Or maybe she would have a female lead, as in Harry's daughter Lily Luna, or possibly Bill and Fleur's daughter Victoire.  I know one fan that suspected Voldemort and Bellatrix could have had a child.  Could the tables be turned and an orphaned child seek revenge on Harry's family?

Who would you hope JKR would write as a main character if she did indeed revisit Harry's world?

Other quotes from today's speech:

Andersen understood that writing for children does not mean pureeing what one would have written for adults.  It ought not to be bland or soppy or devoid of challenging ingredients.

Those who write for children, or at least those who write best for children, are not childlike or immature, but they do remember with sometimes painful intensity both what it was to be small and confused and how wonderful was that fierce joy in the moment that can become so elusive in later life.

Children are not "they."  They are us.  And this is why writing that succeeds with children often succeeds just as well with adults.  Not because the latter are infantile or regressive, but because the true dilemmas of childhood are the dilemmas of the whole of life: those of belonging and betrayal, the power of the group and the courage it takes to be an individual, of love and loss, and learning what it is to be a human being, let alone a good, brave, or honest one.

This is the miracle of literature to which no other medium can compare, that the writer and the reader's imaginations must join together to make the story, so that there are as many different Harrys, Hagrids, and Forbidden Forests as there are co-creators, each one personal to the reader.

See the video of JKR receiving the award.